Due to a few reasons, I didn’t shoot much in 2013.  I’m planning to make 2013 much different.  I have a new camera to explore, but more importantly I want to start challenging myself as a photographer.

To that end, I purchased a book on Amazon called, “Creative 52: Weekly Projects to Invigorate Your Photography Portfolio

” by Lindsay Adler.  This book provides a new project each week.  It is written by a fashion photographer, so I expect to start shooting more portratis than I have in the past.  This alone is a departure from my regular subjects of landscapes and still life.

I’m going to try to shoot a new project each week, but sometimes life gets in the way.  We’ll see how it goes.

WEEK TWO:
CREATE A PORTRAIT OF SOMEONE WITHOUT SHOWING THEIR FACE

Last week I had to really think about what my subject would be, but this week was much easier.  My friend Cindy Chinn is a talented artist and over the years I have seen a number of great photographers shoot the hands of talented people.  Yousef Karsh used this technique to great effect. I had always wanted to try this.

Cindy’s current project is a wood carving.  This gave me a chance to shoot her ‘action’.  She has been using an overhead tungsten light for the project, and I decided to just use this light source.  It did present two problems though.  One was a fairly low amount of light, the other was that the color balance could prove a challenge.  This issues were readily fixed with a tripod and the custom white balance setting on my camera.  Custom white balance is a great feature in digital photography.  It allows me to take a reading using a white card and calibrate my camera to match the available light.

It works great with tungsten, fluorescent or any mixed lighting.  With my camera set up, it was just a matter of posing the hands to fit in the fairly small carving area.  I liked the idea of having the fingers pointing towards the chisel, and chose the back of the left hand as my focal point.  This was much easier shoot than last week, and I got the desired image in only a few shots.

On the left is the raw file from the camera.  It was very close to what I wanted, but I needed to some minor work in Photoshop.  I brought the exposure down about 1/2 a stop in Adobe Camera Raw when I opened the file.  Then I did some colour correction and minor sharpening.  I cropped the image to remove some the top white area and the lower arm.

I also used the clone tool to remove the bright spot showing in the gap on the right hand.  Finally I made a duplicate layer and converted the new layer to black and white and then made it about 20% transparent.  This brought down the saturation of the colors to just where I wanted them.

This was simple shoot with a camera and tripod.  I also used an  18% Grey/White Balance Card

to set white balance and exposure.  This was first time I used this tool and it worked great.  It gave me a great starting point in the image.

Here is the final image that shows Cindy at work.  Also note the one finger is a ring that she made many years ago. 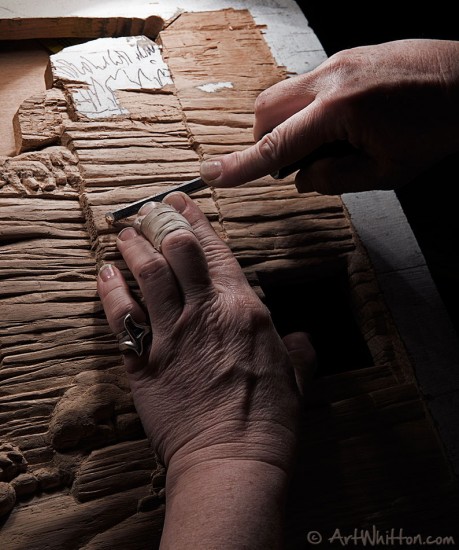 But a print of this image.

<< Last Week: Use One Color