” by Lindsay Adler.  This book provides a new project each week.  It is written by a fashion photographer, so I expect to start shooting more portraits than I have in the past.  This alone is a departure from my regular subjects of landscapes and still life.

I’ve heard many times that a great photo should tell a story.  It doesn’t have to be photojournalism, but it should be interesting enough to make the view wonder, “What’s going on here, who is that person?”  In other words, it should be more than a ‘pretty picture’.  I have found this to be one my greatest challenges as a photographer.  Although I’ve heard this advice for over 30 years, I rarely put it into practice.

When I read in the book that I was to tell a story this week, my heart stopped for a moment, and brain was not happy about it.  I spent days wondering what kind of story should I tell.  I decided that I wanted to set up a still life in the studio and put it all together with various props that I had available.

My idea eventually came to tell the story of a card cheat.  The props would involve cards (obviously), money, booze and of course – a smoking gun.  I used a sheet of plywood as the background to conjure up a shady back room game instead of a nice green felt card table.  I happened to have some cash on hand (mostly ones) to make this a high stakes game.  I added in some empty beer bottles to suggest that the card players might be intoxicated, some poker chips, and in the back of the image a full ashtray to suggest the sense that the game had gone on for a long time.

With all of these elements in place, I arranged them to look scattered, or in disarray.  I purposely shot the scene with a minimal amount of composition to give the view the impression that they had just walked in on the scene.    Lighting was a single flash from the right side to create a harsh side light.

Here’s the final shot, called “Your Cheatin’ Hearts”  (click the image to see it larger) 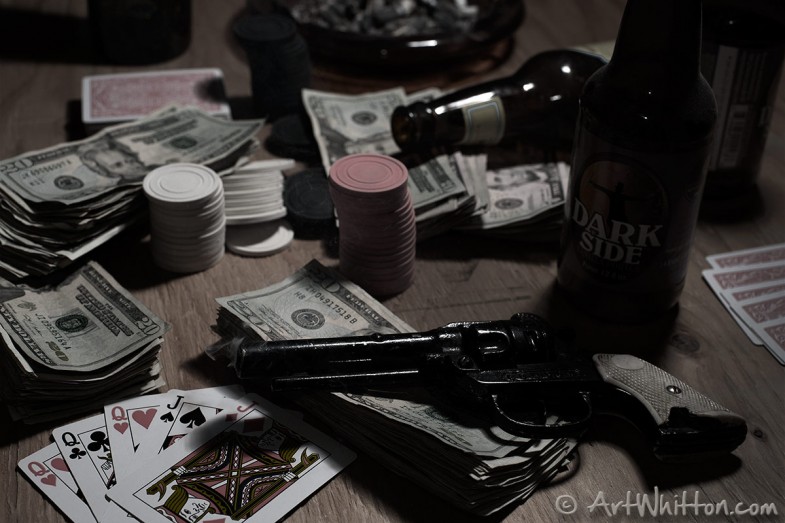 Post processing was minimal.  I adjusted curves and added some unsharp mask.  Then I made a duplicate layer and converted the new layer to black and white.  I dropped the opacity on this layer to give the colors a subdued look.  Finally, I burned in some areas to darken up the corners and open plywood areas.

Buy a copy of this print.