Due to a few reasons, I didn’t shoot much in 2013.  I’m planning to make 2013 much different.  I have a new camera to explore, but more importantly I want to start challenging myself as a photographer.

To that end, I purchased a book on Amazon called, “Creative 52: Weekly Projects to Invigorate Your Photography Portfolio

” by Lindsay Adler.  This book provides a new project each week.  It is written by a fashion photographer, so I expect to start shooting more portratis than I have in the past.  This alone is a departure from my regular subjects of landscapes and still life.

I’m going to try to shoot a new project each week, but sometimes life gets in the way.  We’ll see how it goes.

WEEK ONE: CREATE AN IMAGE BASED ON A SINGLE COLOR

It took me a couple of days to figure out what my subject would be.  This is harder than it seems, really, but then it’s why I got the book.  It’s also winter in Nebraska, so I didn’t really want to experiment outside.  I decided on a green glass head that was in the house.    One colour with a black background should do the job.

I decided to use the profile as any other angle made it look more like a glass ball.  The next thing to consider was the lighting.  I had a choice of natural light (window or overhead fluorescent), flash or studio light.  I chose flash as I wanted to see what I could do with one flash in this project.

With subject and light source selected, I just needed to decide on lighting angle.  As I had a glass subject, I thought that back lighting would be more effective way to see the colours in the subject.

First shot: With the flash set on 1/4 manual, this is what I got.  Way to bright, overexposed and just a mess.  This isn’t at all what I was envisioning.  I wanted a more subtle look with just the dark green of the glass being the main color.  I tried a few different power settings on the flash and got the light levels to where I wanted them.  The problem was that I was still getting a bright light that overexposed the middle and lower parts of the head.

I tried a few flash modifiers light a Rogue FlashBender but I couldn’t control the light path well enough.  With that option gone, I delved into the DIY world and cut up some cardboard to block off the bottom of the head.  Then I added another piece to help block light straying to black paper background.  In the end, I used 4 different pieces of various sized cardboard to shape the light the way I wanted it.

Here’s the setup I used.  I had the flash on its back and used the Flashbender to direct light in the general direction I needed.  You can see the different cardboard light blockers in place.  I put the whole rig on a box to raise the light.  Not the best looking solution, but it did the job.  I also gave me a lot of versatility to try different positioning.

This was also a good exercise in seeing how adjusting these pieces could affect the image.

To the left is a shot of the setup with the camera and background showing.  I used a cheap black paper background, a box to elevate the head and a Nikon D800E with a Nikkor 105mm macro lens.  This choice of lens allowed me to move in a crop away a lot of the background and parts of the head.

In the end, this turned out to be a fun shoot and I learned a few things about controlling the light.

One the left is the image that I saw straight out of the camera.  I was very close to the final image but needed some minor work in Photoshop.

I cropped the image from the top and bottom to get rid of some extra space up top.  I fixed some blown highlights that were a little distracting, and then cloned out some spots that I felt detracted from the image.  All in all, just a few minutes of editing time. 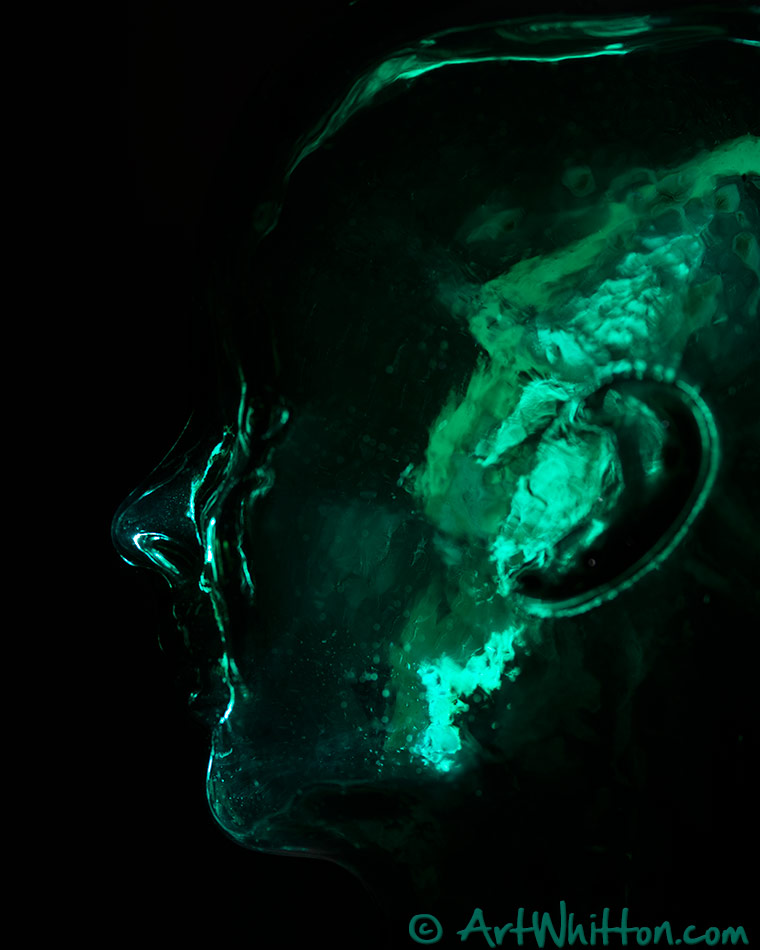 Buy a print of this image