Here is the second of three posts that will show my photos from an August 2016 trip through the Maritime provinces of Canada.  Part one dealt with the first few days in Nova Scotia.  Part three will cover Newfoundland.

This was part of a two week road trip I took with my brother as we explored this region for the first time.

Here is the route we took for this leg of the trip:

We left Truro and headed through New Brunswick to the Confederation Bridge.  This is a curved 12.9 kilometre (8 mile) long bridge and quite a sight to see! 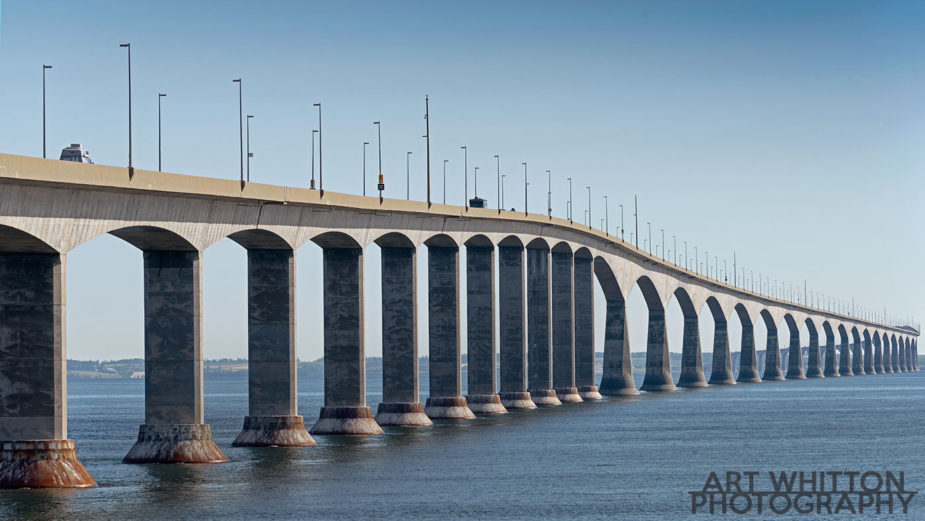 After a few shots from an illegal spot on the road we drove over to PEI. We took a short stop at the visitor center (where we met a 6th generation islander) we made our way towards Charlottetown taking Highways 10 and 19 along the south coast.  If there’s one impression that I took away from Prince Edward Island was that it was beautiful almost to the point of being manicured.  Every house looked newly painted, every lawn was freshly cut.  The roads were good and curbs were trimmed.  Fields of grass were followed by fields of their famous potatoes.  It’s like they were putting on a show just for us tourists. 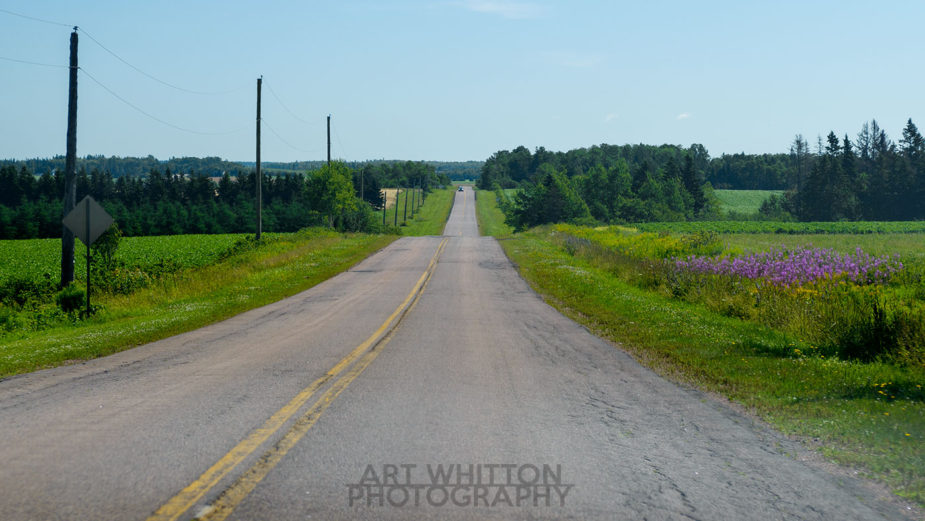 Here is the town of Tryon pushing up through the trees: 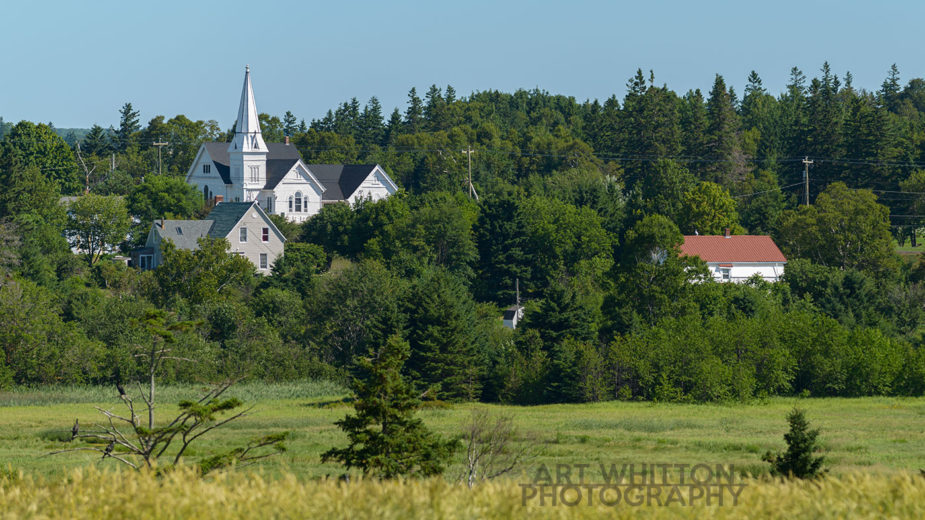 We made our way to Port-la-Joye / Fort Amherst which is across the harbour from Charlottetown.  Here I learned a little Canadian history that was missing from my education: Le Grand Dérangement. Plaques and signs quickly got me up to speed.

This next photo I shot with my new found history lesson as I envisioned the Acadians being marched down this path to ships waiting to take them to parts unknown.  What was a beautiful sunny day in scenic park was a much different place in the mid-1700s. 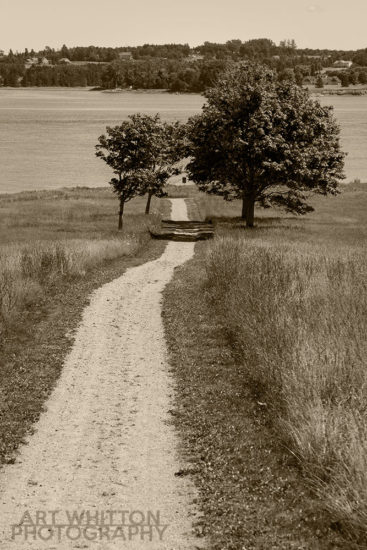 Here’s a shot of one of the rangelights at Fort Amherst.  They work like a lighthouse, but come in pairs so that captains can use them to line up their location and see when they are out of the harbour.  (I learned a lot on this trip, btw)  This shot also shows the famous red cliffs of PEI. 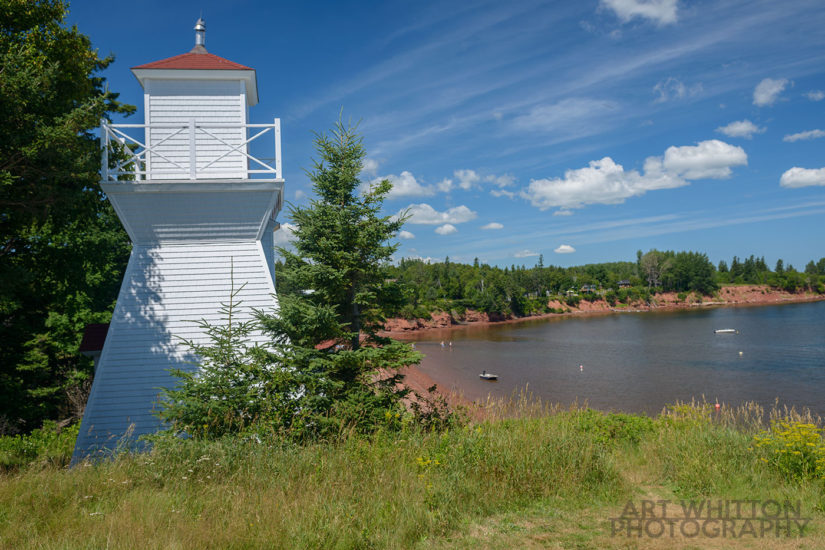 From here we drove into Charlottetown and found that the two main places we wanted to visit were closed for renovations.  A little planning ahead would helped, but we figured the birthplace of Confederation would be open during tourist season.  We were wrong (“Sorry folks – the moose out front should have told you.”).

Here’s a sad photo of my brother Steve trying to get a shot of Province House. 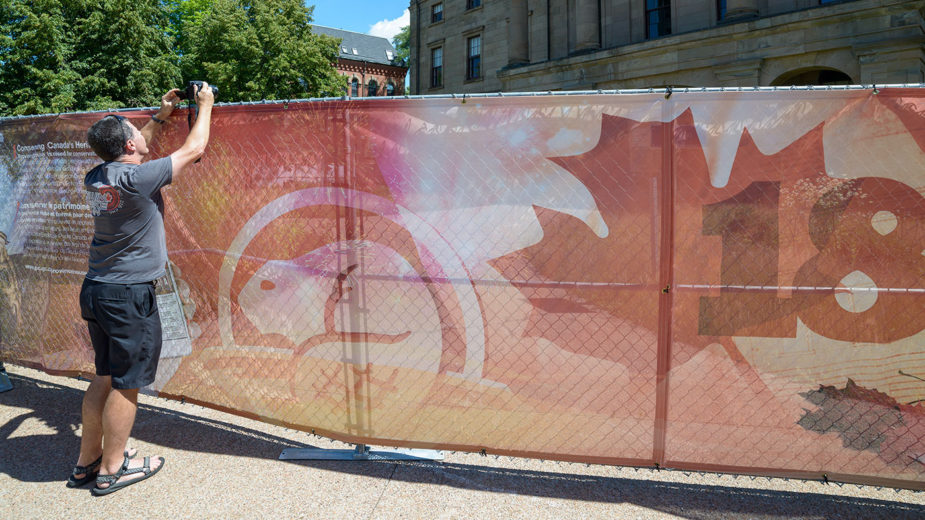 Still, we were not to be deterred and found other subjects to shoot like the Charlottetown War Memorial. 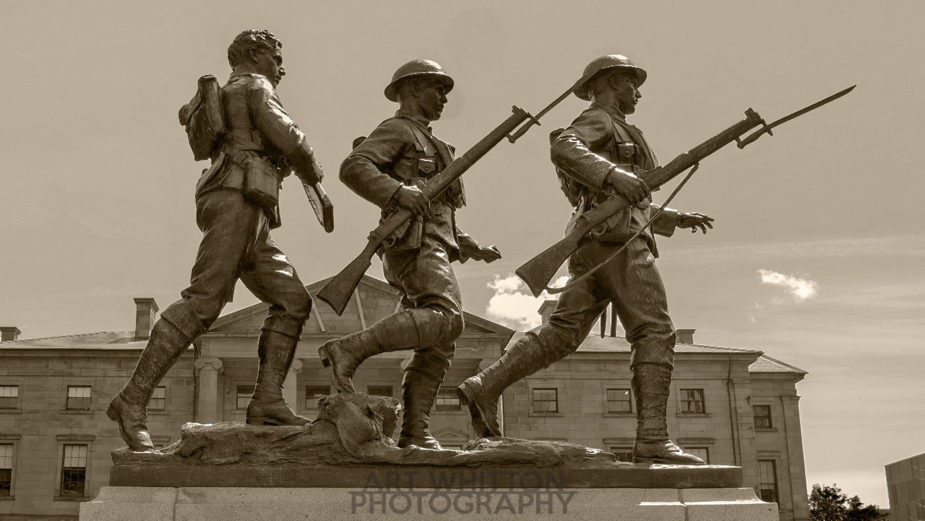 Here’s a shot of the side of Province House with a large ‘1864’ to symbolize the year of the Charlottetown Conference. 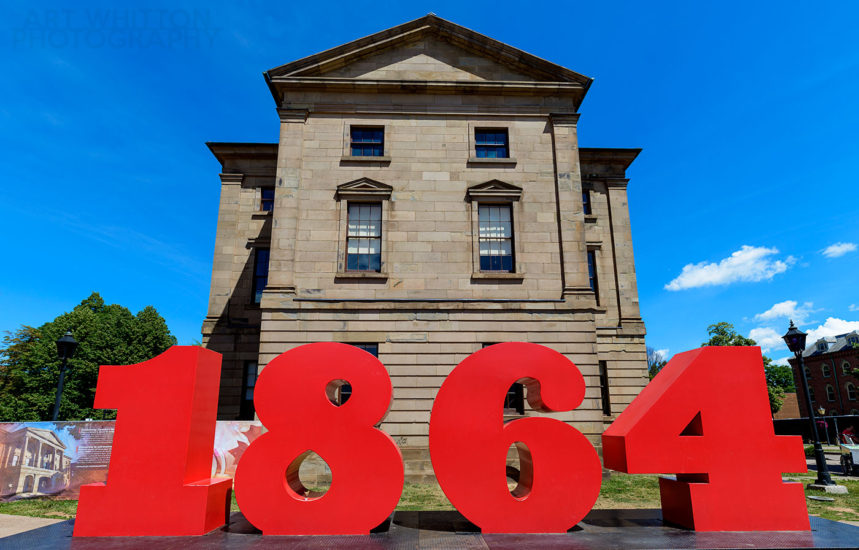 One more stop in Charlottetown took us to St Dunstan’s Basilica.  It opened in 1907 and has a marvelous interior.

From there we drove east and headed to the coast.  We stopped in Georgetown for a few photos and maybe a place to stay the night.  The few rooms were booked, so we took some photos and moved on.

A classic scene in every coastal village we stopped at was a collection of lobster traps.  Many times, they seemed to be in disrepair and left out for us tourists, but this was a group of new ones stacked with care. 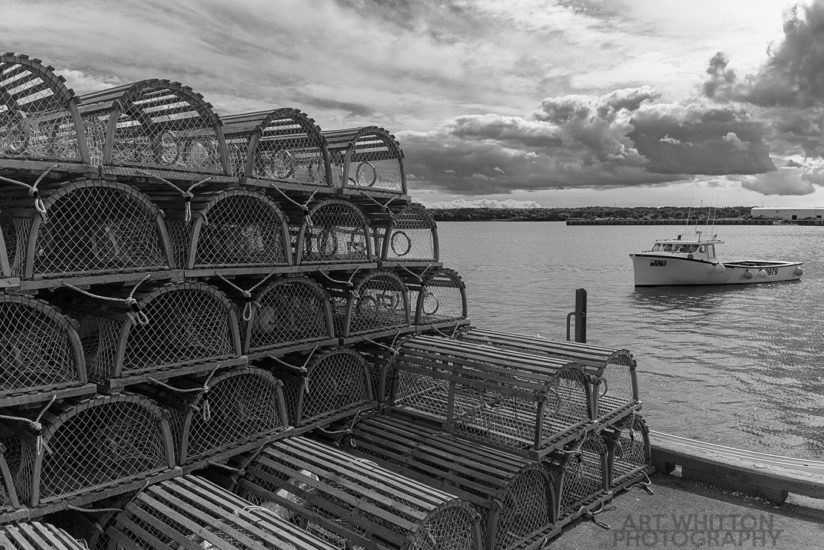 And we couldn’t pass these rustic fishing shacks – just begging to be photographed. 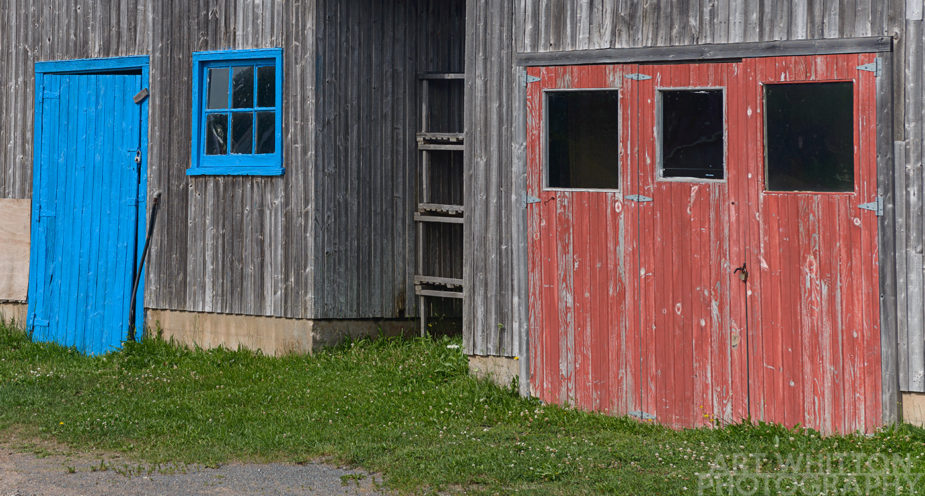 From Georgetown, we drove down to Montague to find a room for the night with the plan to catch the ferry to Nova Scotia the following morning.

Montague is a scenic little seaside town.  I stopped at the bakery for a roll and coffee and headed out for a walk. 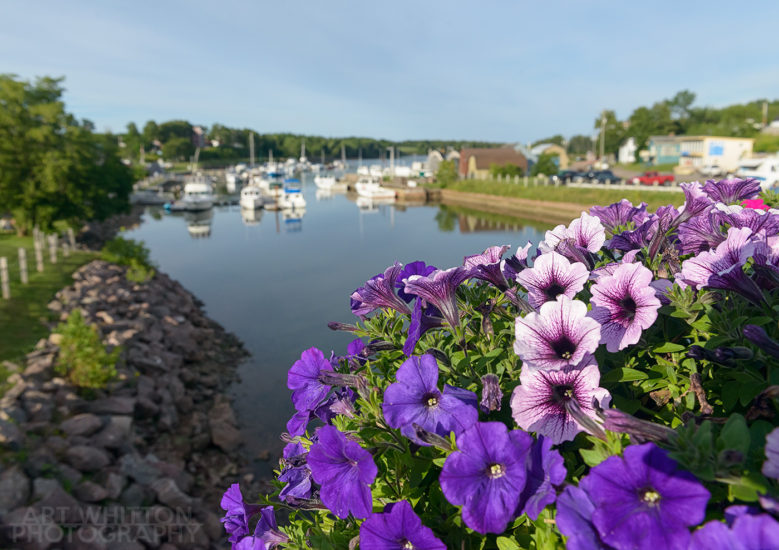 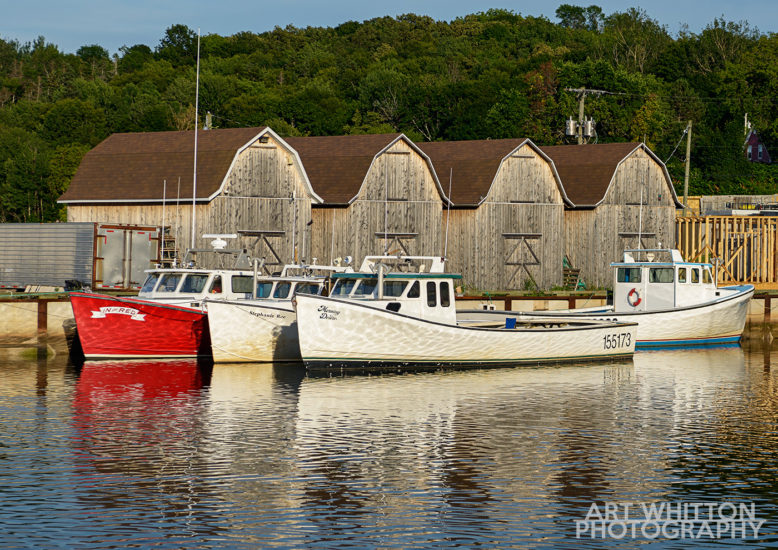 After a night in Montague, we drove to the Wood Island Ferry and found a great little park with a lighthouse that allowed us to kill some time before departing. 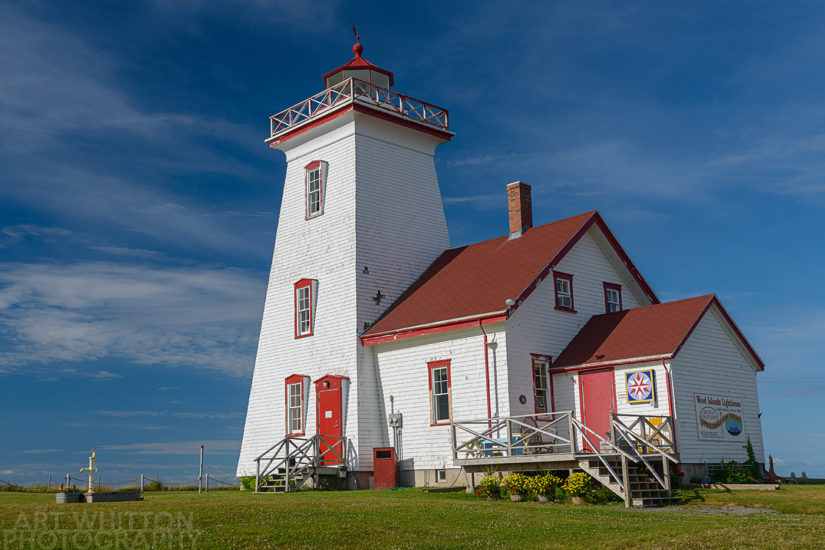 And from the ferry, we landed back in Nova Scotia and headed for the Cabot Trail on Cape Breton Island.

So many stunning vistas along this road, and every now and then there is access to the coast.  This spot is just inside the Cape Breton Highlands National Park. 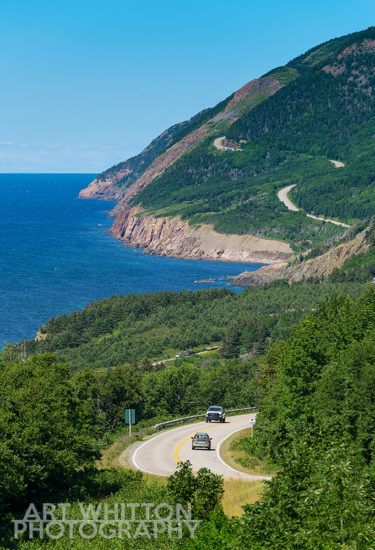 The scenic highway took us inland for a while and we found a couple of short hiking trails to explore.  The first one we stopped at was French Mountain Bog.  This was a varied ecosystem with some great plant life, including the carnivorous pitcher plant. 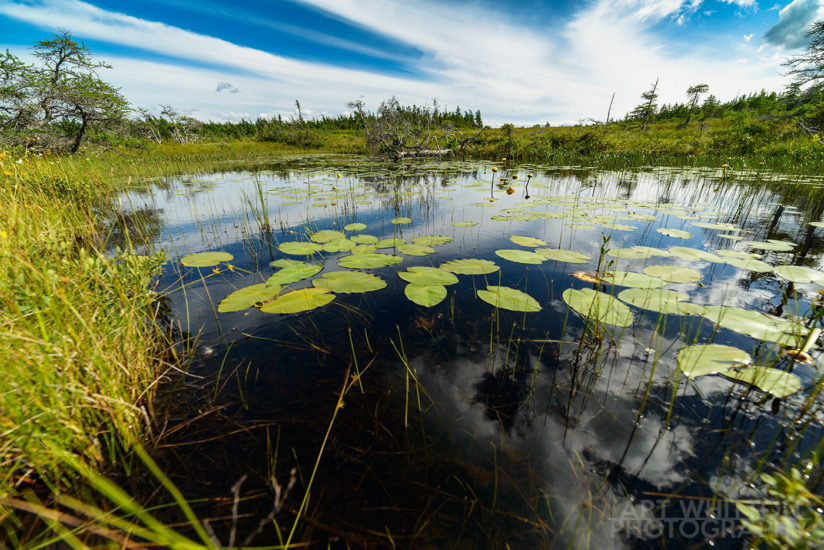 Here is a panoramic view of the MacKenzie River Valley.

A final stop was at the Macintosh Brook Trail to find the waterfall. 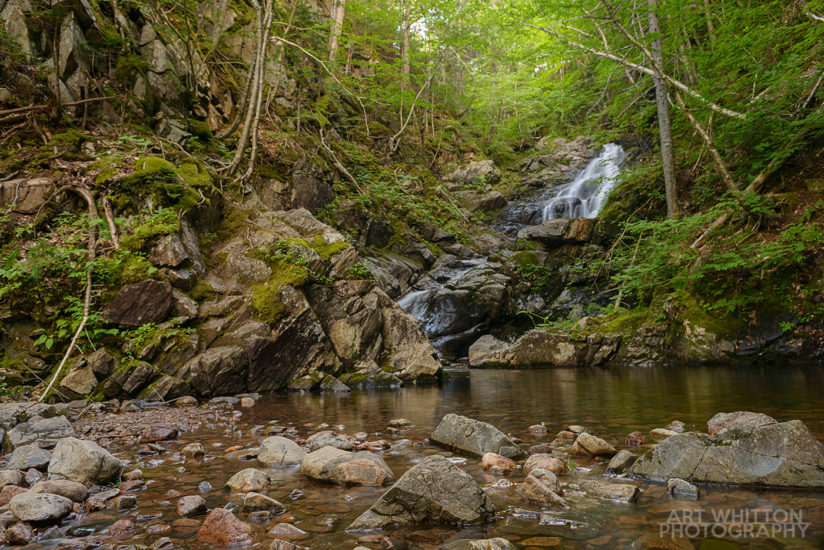 And from here, we continued on to North Sydney to find the last hotel room in town before catching a ferry the next morning to Port-Aux-Basques Newfoundland.

Nova Scotia did not disappoint.  I will need to go back someday and explore deeper.  Thanks for reading this far.  If you have any questions, leave them below or email me – Art@ArtWhitton.com

3 responses to “Nova Scotia and PEI Photography by Art Whitton”