Las Vegas is known for its bright lights and neon. The other thing that makes Vegas unique is its ability to reinvent itself every decade.

You can purchase Limited Edition Prints of this series now!

Out with the old and in with the new! 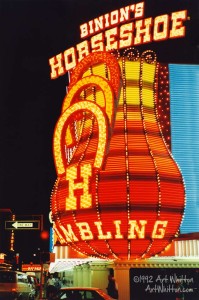 With these changes comes everything from a simple sign change to a hotel demolition and rebuild.  The old buildings are trucked off, but the signs – where do they go?  Since I had moved to Vegas in 1997 I had heard of the mysterious “Boneyard” where old signs went to die.  The dry desert heat ensured a slow death.  But I still thought about the history they represented. 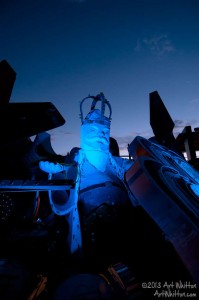 King of all signs

Finally a wonderful thing happened.  People began to recognize these old signs as the artwork they were.

It began with the restoration and installation of the “Hacienda Horse and Rider” in 1996.  Since then, many restored signs have popped up around Fremont Street in downtown Las Vegas.

From these beginnings a movement started to preserve, protect and restore these relics of now gone era.  Was Vegas finally proud of its history?  The answer is an emphatic yes!  Restoring a large sign can cost hundreds of thousands of dollars and countless hours of metalwork and rewiring.

All of this hard work has resulted in one of Vegas’ greatest attractions: The Neon Museum.  Tours are operated throughout the day and night and are hosted by knowledgeable docents who tell the history of Las Vegas through its signs.

In June of 2013, I finally had a chance to take this tour.  I found that they started providing night tours, which seemed the best time to go.  As a photographer my first thought was that I could view signs against a fading dusk.  As a tourist I know that evenings are the best time to do anything outside during the hot Vegas summer.  I checked sunset times – 8pm – and booked the 7:30 to 8:30 tour online. 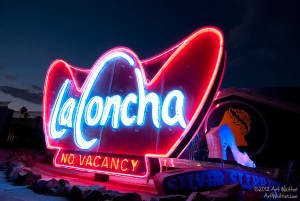 I showed up at the museum a little early with my brother (also a history fan) and found that the new headquarters is the former lobby of the La Concha hotel.  This is a beautiful mid-century architectural masterpiece (designed by Paul R Williams) that was moved from its original home on the Strip to its present location.

This was the meeting place for the tour and a small gift store.  Interactive exhibits are also inside this former lobby.

Our group was gathered and we started the tour.  The yard is nicely laid out with easy paths and rocks to dissuade us from getting too close to the exhibits.

I had read before I arrived that no backpacks, tripods or other equipment was allowed on the tour.  I was limited to one lens and one camera.  This led to much inner discussion for the weeks ahead of my trip.  Do I go with a fast 50mm f1.4 or a 28-70 f2.8 zoom?  I decided on the slower but wider 12-24 f4 and my trusty Nikon D300.  This would allow me to get some wide angle shots and I could always crop later.  The f4 was fast enough as I could shoot handheld down to 1/30 of a second.  By the end of the night I was shooting at 500 ISO.  While shooting, I was glad I made this lens choice.

As the grounds of the Boneyard are condensed, the tour leader allowed some leeway 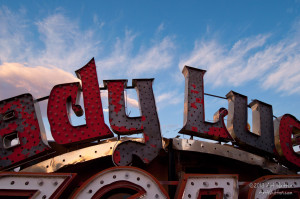 to move ahead or lag behind for photos.  I took full advantage of this while staying within earshot to learn as much as I could.  There are only 3 or 4 signs that are functioning and the rest are lit with a variety of spot lights using different colors and timing.  This made for a great variety of lighting as the tour went on.

An early shot of the Lady Luck sign (right) shows an unlit sign against the last light of day.  Exposures were tricky, and some post-processing (curves adjustment) was needed on most shots.  I tried to expose for the sign and let the sky fall into place.  I had no flash to compensate for the difference in lighting.

As the tour wore on, the sky darkened and lights were turned on.  Exposure for each sign was a little different and composing in tight quarters was sometimes a challenge. I ended up with a few 3 image panoramas. Click the images below for a larger view.

By the end of the tour we were back we started.  The lighting had changed so much in one hour that the start of the tour near the Moulin Rouge sign looked much different. 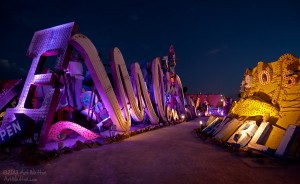 After the tour we bought a couple of souvenirs to support the group and headed down to Fremont for some food and beverages.  Then we went out and shot some more signs.  A great night thanks to the people with the vision to preserve the past and save it for future generations.

One response to “NEON MUSEUM IN LAS VEGAS”