Another week, another photo project.  This one is delayed as it’s been so darned cold in the school.  It’s hard to muster up the interest to shoot when the studio is 32F degrees.  But still, I had an image planned and shot it.

This week I was to shoot a ‘symmetrical image’ or a ‘mirror’ image to use another term.  Subjects for this are all around us when we look, but I decided to set up a scene in the studio.  In the book that I’m working from, the author made mention of how director Stanley Kubrick often used symmetry in his movies.  This is one of the many things he did that made his movies so visually striking.  Think of the twins standing in the hallway in “The Shining” as a memorable example of this.  Here’s a link to some more images  from his movies – LINK.

I don’t have the budget to build a set like the inside of the Overlook Hotel, so I went for a scaled down approach.  I set up a simple scene using two chairs, a table and a lamp.  I would have liked to have used natural lighting as Kubrick did in many of his movies, but the single lamp created a bright spot.  I used a studio light placed directly above the camera to even out the lighting.

The first shot without the table seemed a little bland, so I added the table and then an ashtray and cigarette to try to tell a story.  The final image below conjures up a look of a waiting room.  I think the old bank chairs and (fake) antique lamp give the image a timeless quality.  This could have been shot in the 50’s or yesterday.  For some reason, I’m thinking of either a dentist’s or doctor’s waiting room when I see this.

For the final image, I adjusted the curves, boosted the saturation slightly and cloned out some marks on the floor.  I also cloned out the electric outlet under the right chair, as it stood out too much. 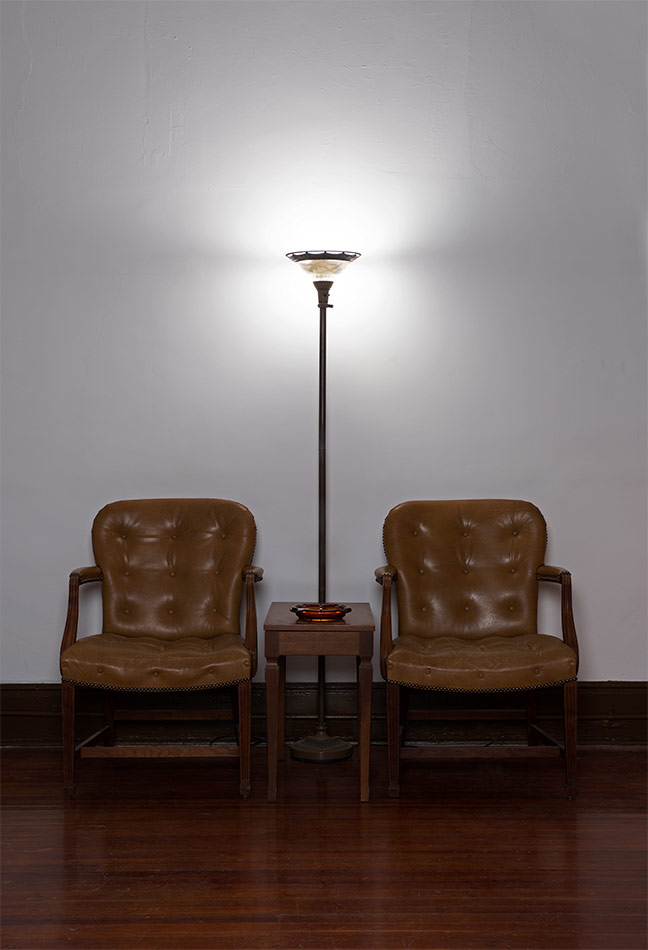 Buy a copy of the print here.