Planning the shot and Shooting UP 844 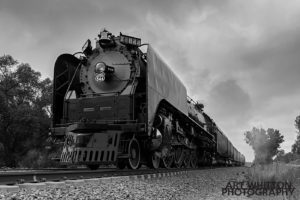 October 18, 2016: Last week a historic steam engine rolled through this area.  This engine is a large, black beast that bellows smoke and draws a large crowd where ever it goes.  I had shot it in May 2011 and this time I wanted to improve on my previous photos and knew this would take some preparation.

There comes a time in a photographer’s journey when they want to transition from ‘taking’ photos to ‘making’ photos.  In my mind, taking a photo is a passive experience where I point the camera at something and shoot it.  It doesn’t mean the photo has any less value, but it is somewhat of a spectator sport.  Making a photo is more engaging.  To make a photo I will plan the shot, I will think ahead about where I need to be and where the light will be.  I need to see the final image in my head and work towards that goal.   This continues into the processing of the image in Photoshop.

Last time the Union Pacific #844 came to town I ‘took’ photos.  This time I wanted to ‘make’ photos.

Here’s a typical photo from the 2011 shoot.  I still planned the shot by picking what I thought was a good spot ahead of the crowd where I knew the train would be stopping.  I was south of the train so that I would have the light to my back. 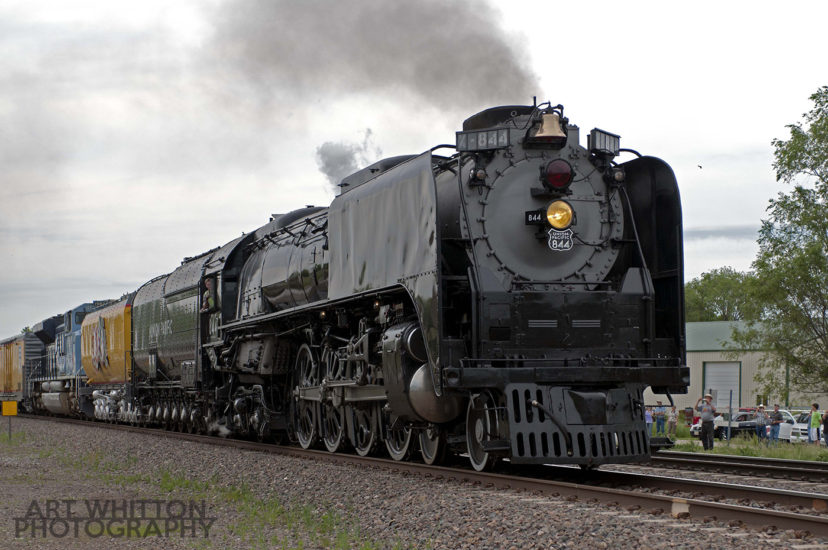 It’s a decent shot of a train, but nothing special.  I’m going to guess that dozens of people took a very similar photo that day.

Now it’s 2016 and I’ve learned some things since then.  I also challenge myself more than ever.

I knew the train’s schedule from the UP website.  They now have a live GPS tracker so you know when the train is coming.  I consulted the schedule, and I know the area well enough to make some plans.

My first idea was to shoot the train from a highway overpass.  I knew the train would pass under me and then stop in the town of Belvidere about 1/2 mile away.  This would give me time to shoot from the overpass and then drive to town and get some more shots.

Another train passed by as I waited for #844 and this allowed me to practice the shot. 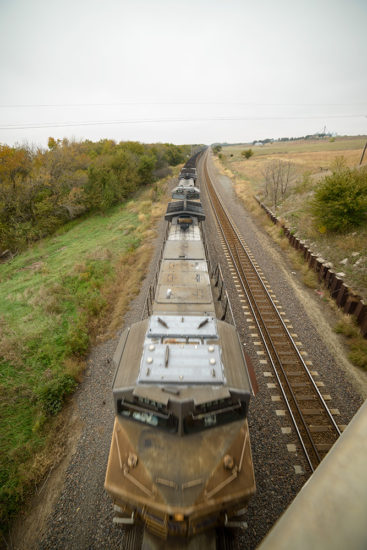 The image above is the shot straight from the camera.  I used a 14mm wide angle lens so that I would get the train as well as some of the surrounding area.  I also shot part of the overpass and the power lines in the background.  I wanted some motion in the train to show it was moving instead of having a sharp photo that might imply it was parked.

I made a couple of adjustments to my settings.  I switched to Aperture Priority mode so I could set the f-stop I wanted.  In this case, I know that f8 is the sharpest setting for this lens.  I also knew that at f/8 almost everything will be in focus from close to far.  This would give me a slower shutter speed than the 1/250s in my practice shot, so I boosted the ISO up to 200.

I just had to wait for the train.  I was also shooting with my 70-200 telephoto lens so that I could get shots of the train coming down the tracks and would have to swap lenses before the engine got too close.

Here’s the last photo I shot with the telephoto before I quickly swapped lenses and prepped for my my main shot. 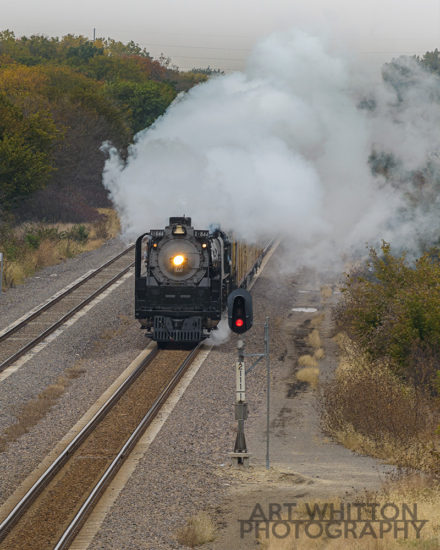 Here are 5 shots taken within a second of each other.  It shows the amount of time it takes from getting the shot to being surrounded by smoke and steam.

Although I planned the shot and everything was in place, it was still tough to get the image I wanted.  After switching lenses, I had trouble wrapping my camera strap around my wrist so it would be secure as I hung over the ledge of the overpass.  Since my camera wasn’t secure, I didn’t lean over as much as I wanted and I still shot some of the concrete overpass.  The second shot (above sequence) was my ‘vision’, but I couldn’t use it.  I ended up with the the first image above and made some edits to contrast, cropping and I removed the power lines at the back. 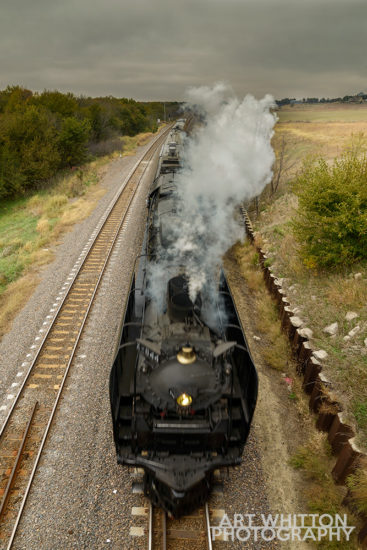 Unlike my first shots in 2011, I now had a photo that was unlike others I had seen.  I could also take some satisfaction with having planned a shot and carried it out almost as I had wanted.

From here, I drove to Belvidere and shot a handful of photos while it was stopped.  These looked like the ones I shot 5 years earlier.  I still used the 14mm to get a little different perspective. 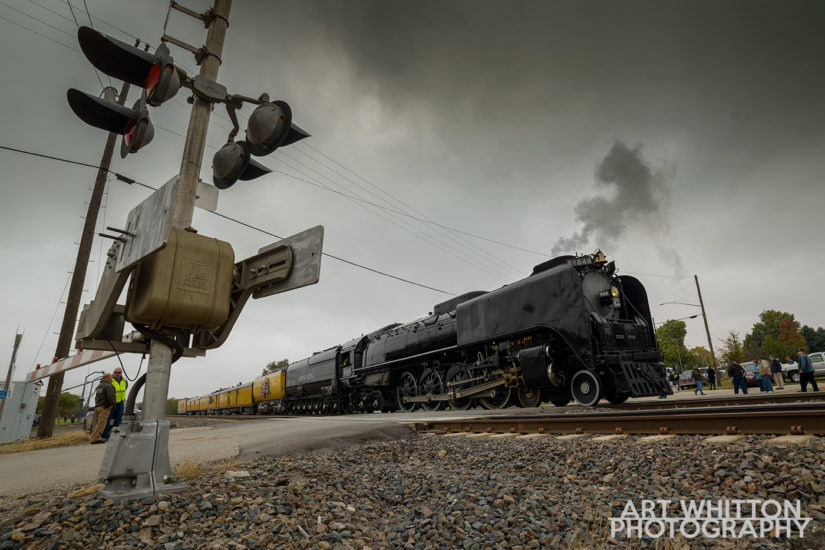 I quickly moved on to my next planned spot.  I knew the train would be staying in Belvidere for 30 minutes, and that would give me enough time to get to the next town.  I knew that before the train arrived in Fairbury it would follow along River Road.  I had looked at Google maps the night before to see if there was a place where I might be able to shoot the train with the Little Blue River in the scene, but couldn’t find one that was accessible and easy to get to with the time allowed.

I drove out and found that I wasn’t the only one with this location in mind.  All along River Road any available spot to park and get near the tracks was filled with parked cars and trucks.  I kept driving until I found a spot that gave me access to the tracks and had some trees in the background.  I had hoped for more fall colour, but you just have to make the most of what you have on hand.

This was the same situation where I would shoot the train with the telephoto lens and then swap out as it got closer to try and get my second planned shot of a low, wide angle shot. 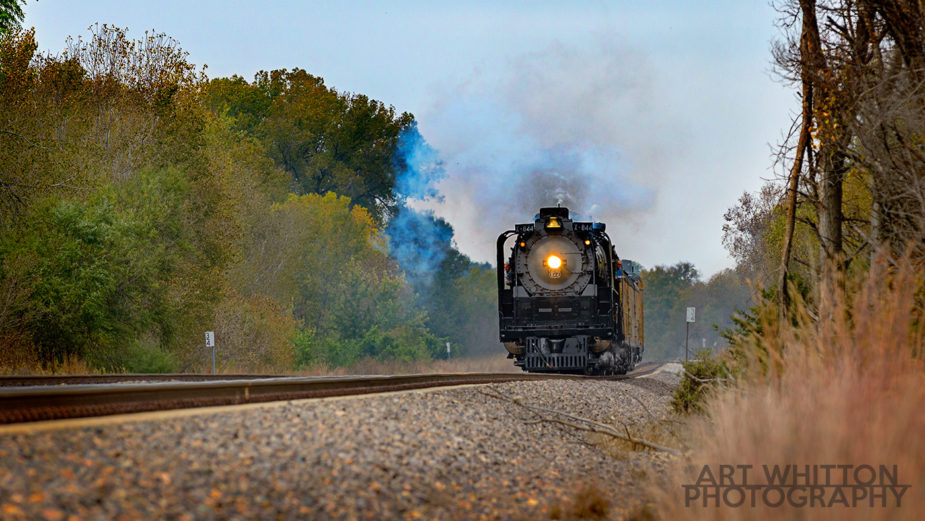 I have to say it was a thrill to be close to a giant speeding steam engine!  I shot almost continuously as it sped by.  My D800e has a large sensor and is not the fastest camera on the market.  It still shoots about 5 frames per second and the sequence above shows what happens in that one second.  I don’t rely on the camera to frame the shot correctly, so I’ll shoot in very short bursts and try to get the best framing I can.

I used the fourth image from the sequence in my final shot from this spot. 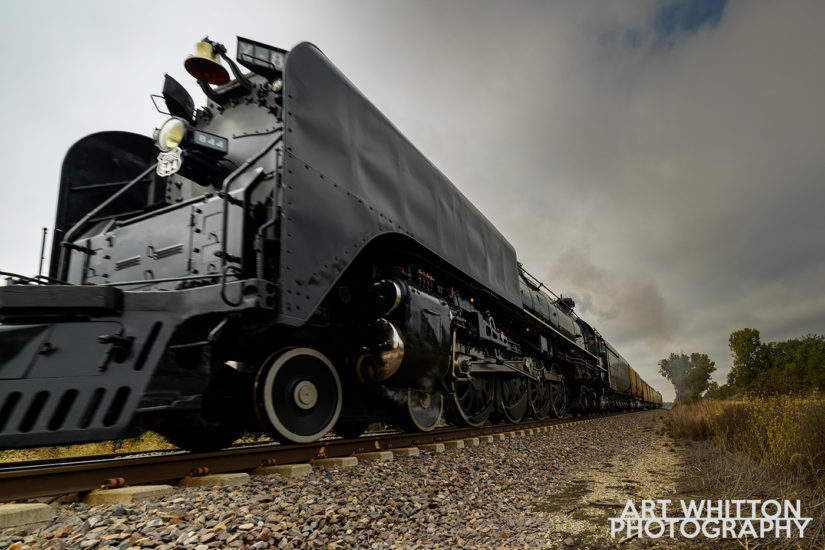 I would have liked to have had the front of the train in the image, but it still works as it is.  This is a shot I planned and I hope it’s a new perspective on a train that has dozens of photographers along this road.

Now the train was heading to Fairbury where it would stay for the night.  I didn’t know where it would be stopping, but I had hoped it would park in front of the historic Rock Island Depot.

Rather than go straight to the depot, I drove to an overpass that I knew would give me an elevated view of the depot.  My guess was correct and the train was slowly pulling up to the depot. 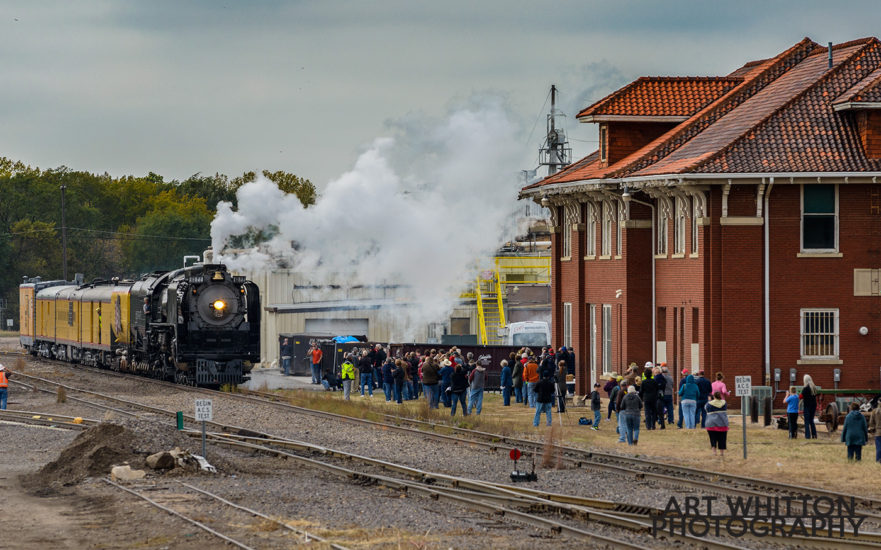 A good sized crowd was there to greet the train and I shot a few more from this angle and some lower by the tracks.  I then drove over to the depot to see what shots I could get.

I saw potential for some interesting shots, but with the large crowd it was not going to happen at that time.  I hung out and kept shooting for a while and then decided to come back later in the evening.

I drove back after dark and hoped that the train was still next to the depot.  Thankfully it was and the crowds were gone.  A couple of other photographers were there and it was fun to talk and exchange some stories.

The train was not well lit.  There was little light on the depot, but the black train was almost lost in the darkness of the rail yard.

Here’s a shot that shows what I saw when returned to the station:

I thought it might be dark, but wasn’t expecting this.  Being somewhat prepared I had brought a flash and a diffuser with me (and fresh batteries!).  A better prepared photographer might have brought a second flash and spare batteries.

Here’s a shot that shows the straight from the camera photo using multiple flash bursts while the shutter was open for 8 seconds. 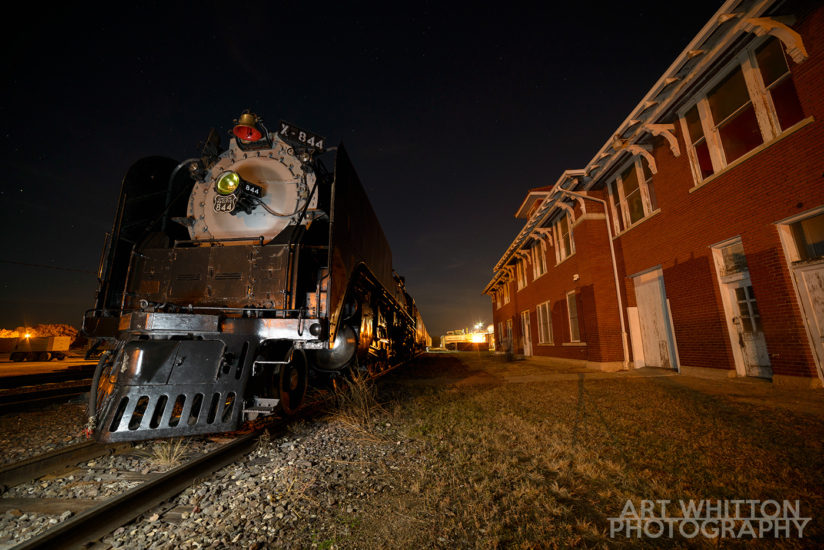 This was close to the vision I had for this shot, so I kept working on it and hoped my batteries would hold out.  I had a friend press the shutter button while I crawled around and lit up the engine with the flash unit from different angles.

For the final image, I knew I couldn’t get all of the flashes done in one shot and would have to combine some images.  So I shot four frames and lit the train in different areas to combine later in Photoshop.  Here are the four images I used as they looked ‘SOOC’ (straight out of camera). 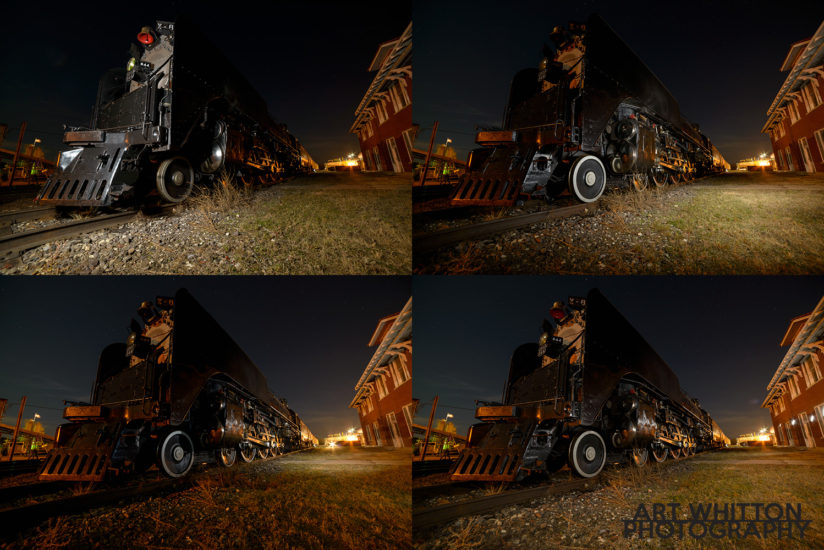 And finally, here is my favourite image of the series.  I love how the train is lit, the station is in the background and the sky shows a few of the stars that were out. 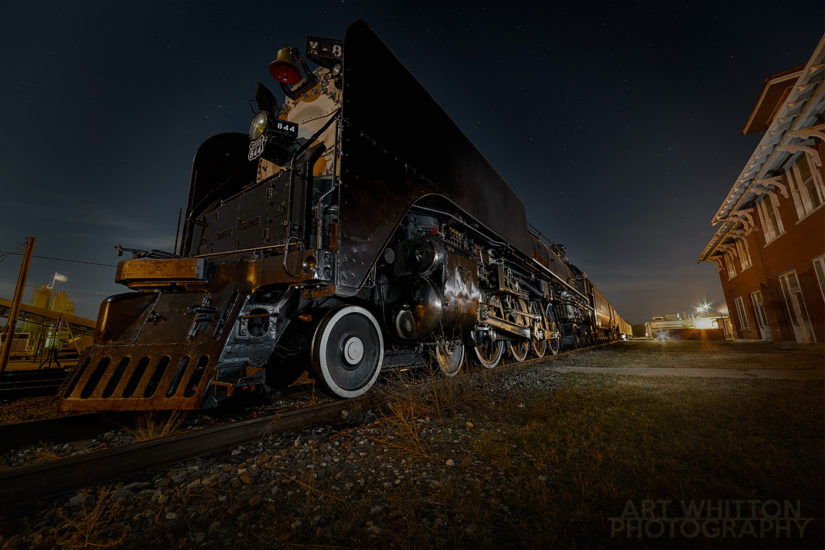 That pretty much explains my day of ‘train chasing’.  It was a fun adventure and I learned from it.  If you enjoyed this story or have any questions, please let a comment below or email me at Art@ArtWhitton.com

2 responses to “Planning the shot and Shooting UP 844”