I love to travel and see new places, smell new smells and try to get the ‘vibe’ that any particular location is sending out.  With that in mind, I also try to capture that ‘vibe’ visually with a camera.  Memories fail; cameras record the sight as you see it.  I can look back through an album (or folder) of photos and take a mental trip back to that unique time.

With digital cameras and storage, it’s easier than ever to take a trip back in time and relive a vacation or family event.  I have a very small family that’s spread out, so most of my photos are of things and places.

I try to use the best camera that I can comfortably travel with.  I also will admit that I don’t carry a camera with my every where I go when I’m at home.  It’s a habit that I need to start enforcing. 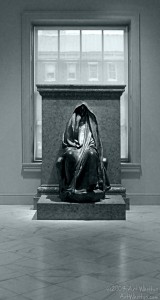 But back to travel photography.  I have two different modes of taking images while on the road.  I’ll either do the quick informal shots to record a scene or I’ll get serious and take my time, try different exposures and try to capture the mood of the moment.

Take this photo at the left.  There’s a lot of ways to shoot a portrait of a sculpture, just like there to shoot a portrait of your friend.  What I tried to do here was capture what was unique to me about this particular piece.  The sculpture (Adams Memorial in the National Gallery) was at the end of the hallway and looked lonely, even from a distance.  Getting closer I could see the despair and anguish in the artwork.

I went back down the hall and lined my shot to be a square on shot with the window framing the sculpture.   I included more space to allow me to later crop and include more of the floor leading up to the subject.  The lighting is a combination of the museum lights and the dull sky outside.  They combine to give a soft glow.

Later on in Photoshop, I converted it to black and white and gave it a subtle blue tint to make the image a little ‘cooler’.  I did some final crops, added some sharpness and was done.

I took some other images of this artwork closer in, but the results don’t give me the same feeling when I look at them.  When I look at this image, I’m taken back the hallways of the National Gallery and seeing this lonely figure at the end of the hallway.

Here’s an older photo from 1997.  I shot this on film and then scanned the 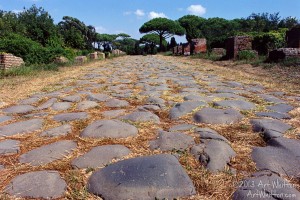 negative to get the digital file.  I took this in Ostia Antica near Rome.  This day started out as one of my favourite photography days ever.  It began in Ostia and by sunset I was at the Coliseum waiting for the perfect light, and then I shot a lot of Rome’s landmarks by night.

I was as Ostia in the morning and had the place to myself.  Imagine this photo with 100 tourists standing in the way.  I took a lot of photos (for film) and this one ended up being my favourite of the day.  The stones are actually a Roman road that has been in place for over 1500 years.  In the background are some of the ruins that are common in this area.  At the very back are some pines trees and finally a bright blue sky.  All of these elements add up to remind me of what this morning was like.  The history, no crowds, the ruins – all on a beautiful day. 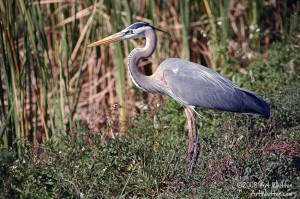 Believe it or not, this photo of a heron made me fall in love with Florida.  This was my second time there and I was staying the Palm Beach area.  I decided to use some spare time from work and check out a nearby state park.  I walked around and found all kinds of birds and alligators.  I had a great time just walking about the park looking at some amazing wildlife.  After a while, I found this great blue heron and he (she?) just ignored me as I took a photo, stepped closer, took a photo, stepped closer, etc.

I got close enough to nicely frame this bird and took the final, keeper shot.  From that point on, I was hooked on Florida and I also found the joy that people get from shooting birds.

Since this shot was taken I’ve been to Florida a couple of more time for work.  Each day I’m there I look for the nearest state park and plan my time accordingly.  Without a camera and without a few photos like this I might not have the same motivations that I do now.  I’m shooting more birds back home now as well.

So there’s three different travel photos, each with a different vibe.  First was the emotion of artwork.  Second was the sense of history and finally the draw of nature, all contained in three images.

This post has also not mentioned one single camera setting.  With each of this photos I don’t care what setting was setting was used.  I did at the time to get the best exposure, but any camera can capture a slice of your history on automatic.  Cameras are welcome (and seen)  almost everywhere these days so take yours with you and enjoy the memories down the road.

Ok, small rant: I see so many people recording very special times on some of the worst digital cameras and phones these days.  It’s better than nothing, I guess.  Maybe it’s the camera salesman coming out in me, but there is no reason not to have a small, decent, affordable camera with these days.  <end rant>

One response to “TRAVEL PHOTOGRAPHY”