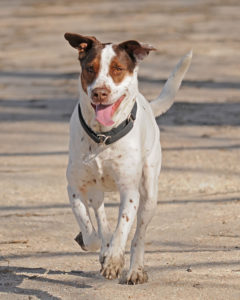 Sometimes a photo will just appear to you, and this post is about the sad photo which came to me at dusk on September 15, 2017. It’s an odd tale of chance, fate, timing or divine intervention depending upon where your beliefs lie. For me, it was a crazy set of circumstances towards the end of a horrible day.

This day started out like many others at the time, I got up to feed the dogs. We have two Newfoundlands, one 10 years old and the other 6. A third dog, Buck – a 17 year old English Pointer (plus). We adopted Buck from a shelter in Las Vegas when he was 4, and he’s been a strong, faithful dog through all of his years. Not quite an angel, but a smart guy who defended his yard and was enjoying the good life in his senior years.

Buck also had heart problems and was on two different medicines to help with this. He had a ‘Grade 6’ (out of 6) heart murmur and over the past few years he would have incidents where we thought we would lose him. His hind legs were weakened from age and were getting worse by the week. But today, he was showing his age and was falling almost every time he walked.  To end his suffering and not put him through a final decline that was nearing its end, we decided it was time to let him go.

After a quiet drive home from the vet, we came home to the two Newfys, who both seemed despondent as well.  Did they know?  Do dogs know when these things happen?  It was a quiet afternoon, but at the end of the day I wanted to go shoot a sunset scene to capture a memory.  This is something I did after we lost our dog Tosh, and it’s my way of making a final tribute to a friend. 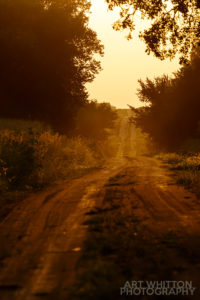 I have a somewhat regular route I take while shooting sunsets, and I combine that with known places to see deer.  So I left Chester down the dirt road, headed east on Cedar, turned south toward where I call “Deer Corner” and finally back towards the setting sun on Diamond Road. The sun was low at this point, so I was driving slowly with the visor down and being alert for any rare oncoming traffic or any deer that might dart across the road, which would be more common than traffic.  I crossed the highway and continued along Diamond and found a great scene in front of me (photo on the left).

I shot here for a while, but the sun was about 15 minutes from setting, so I moved forward.  Again, driving very slowly in this ‘known deer area’ and half blinded by a dirty windshield,  I drove on.

Just over the crest of hill you see on the left, I saw an animal walking along the road.

Seeing an animal walking along a dirt road in Kansas is not an unusual sight.  I’ve seen deer, raccoons, rabbits, opossums fairly often.  Usually, they will scatter into the fields when the truck pulls up.  I drove diagonally across the road, parked and quickly started shooting to get some frames off before the animal ran into the corn field and was never seen again.

Instead of running off, this small animal just kept trotting along the road towards me.  Even with a 500mm lens, I couldn’t make out what kind of creature this was.  It had an odd gait, a strange shape and wasn’t running away.  At times I was even considering that I found a small monkey on a dirt road in Kansas – that’s how strange it looked. 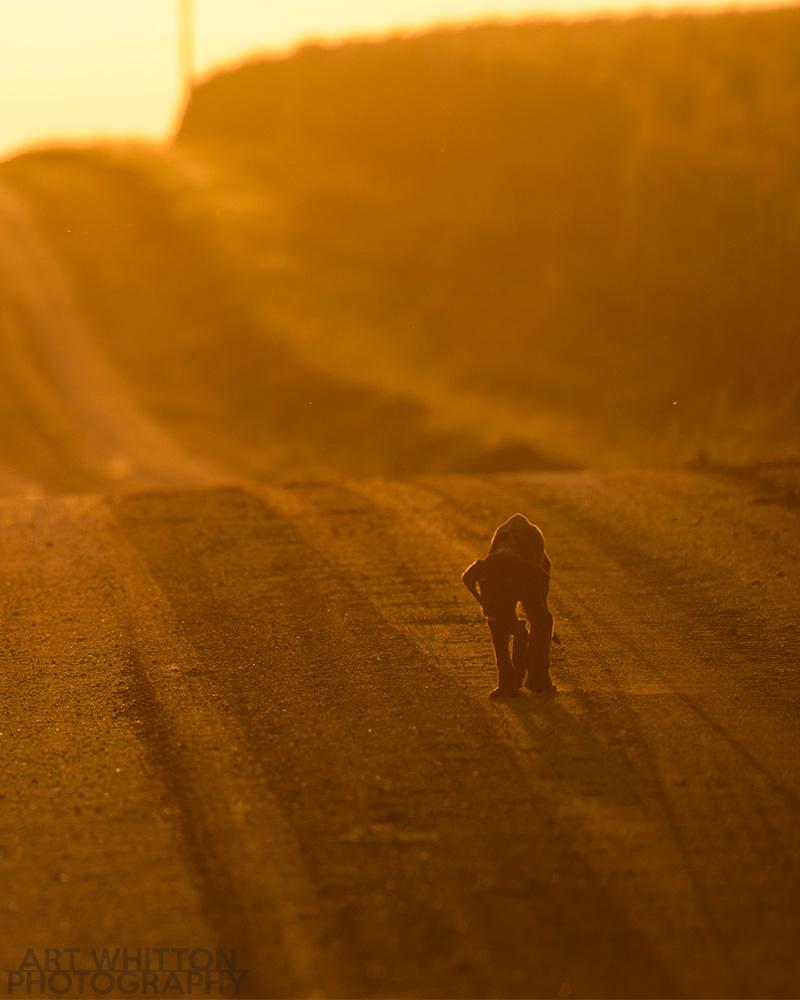 It got closer and closer and it wasn’t until it was about 20 feet from me, that I realized, “OMG – it’s a DOG?!?”.  I hopped out of the truck and found the skinniest puppy I had ever seen. Despite his emancipated state, he was friendly, wagging his tail and showed no fear.

It was at this point in the evening when all of the emotions of the day came tumbling together and consumed me like a tidal wave.   Of all the times I’ve driven these back roads, ‘this‘ is the day I find a stray?

My first thought was to see if our local vet was home.  Nope – out of cell range.  What to do…. what to do…

Just as I am trying to sort out this new reality, another truck pulled up.  The man had a can of dog food and a plate, and had previously seen the young pup.   We chatted for a bit, as I was going through the mental gymnastics of what I’ll be doing next. I came to realize I really had only one option.  I picked the little guy up and put him in the back of the Suburban.

As we headed back to Chester, the sunset was getting more interesting, so I stopped to shoot a few more frames while the puppy tried to climb into the front seat and over my camera gear. 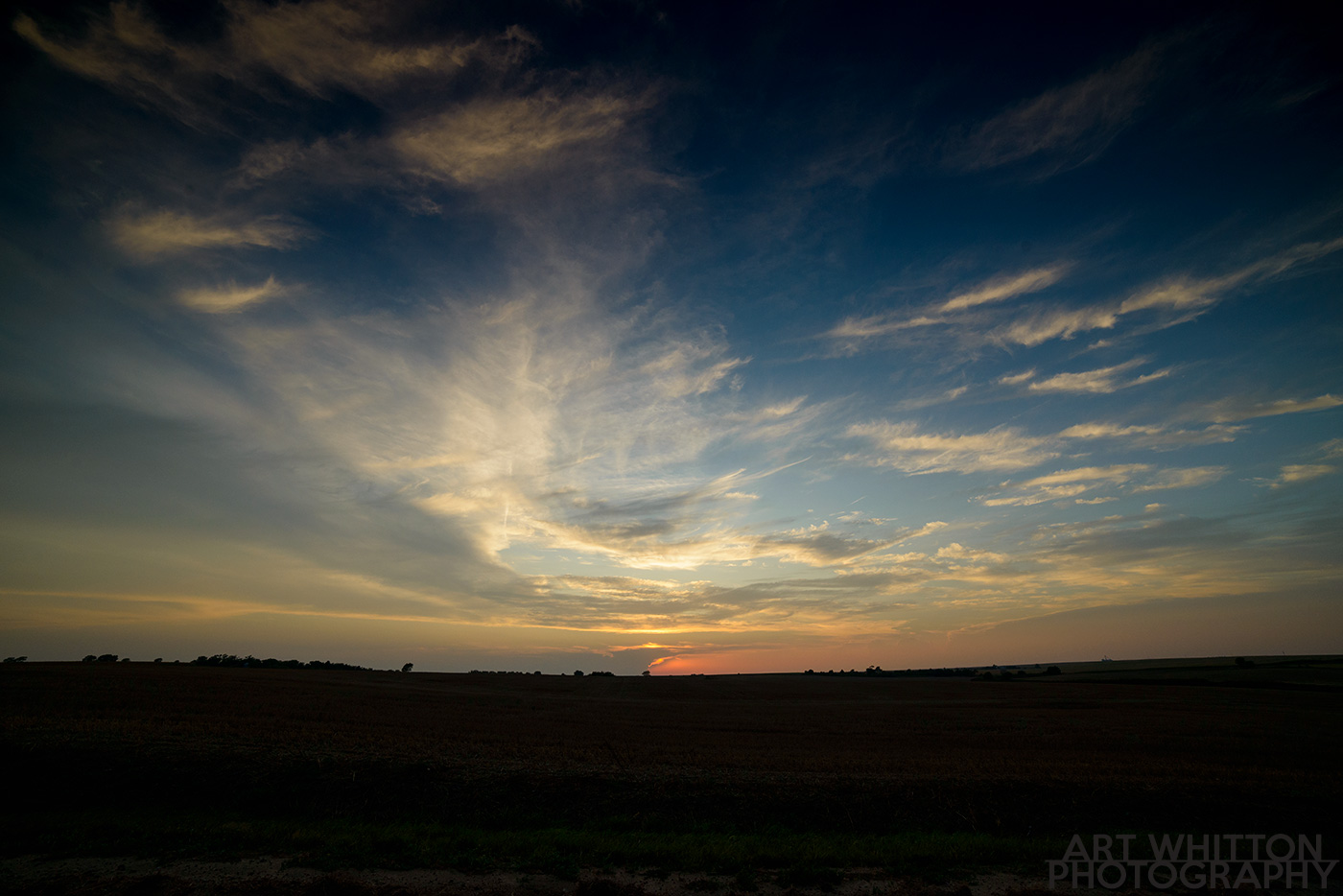 I would have like to have kept shooting, or found a more interesting location, but I had a puppy in the truck that needed some attention. He settled on the armrest for the short drive back to Chester.  As I got closer to town I was able to get enough phone reception to find out that Christie the Vet was home, but we kept getting cut off.  I stopped for a few more photos before getting into town.

Finally in Chester, I had enough of a signal to have a conversation and Christie met me out in front of her house.  She was ready with some medication and young pup received his first medical care (which he handled very well).  A quick checkup and we were ready to head home.

Just before we left, I had noticed that sky was more dramatic now, and I said to Christie, “Gotta run – this is the photo I was supposed to take tonight!”. 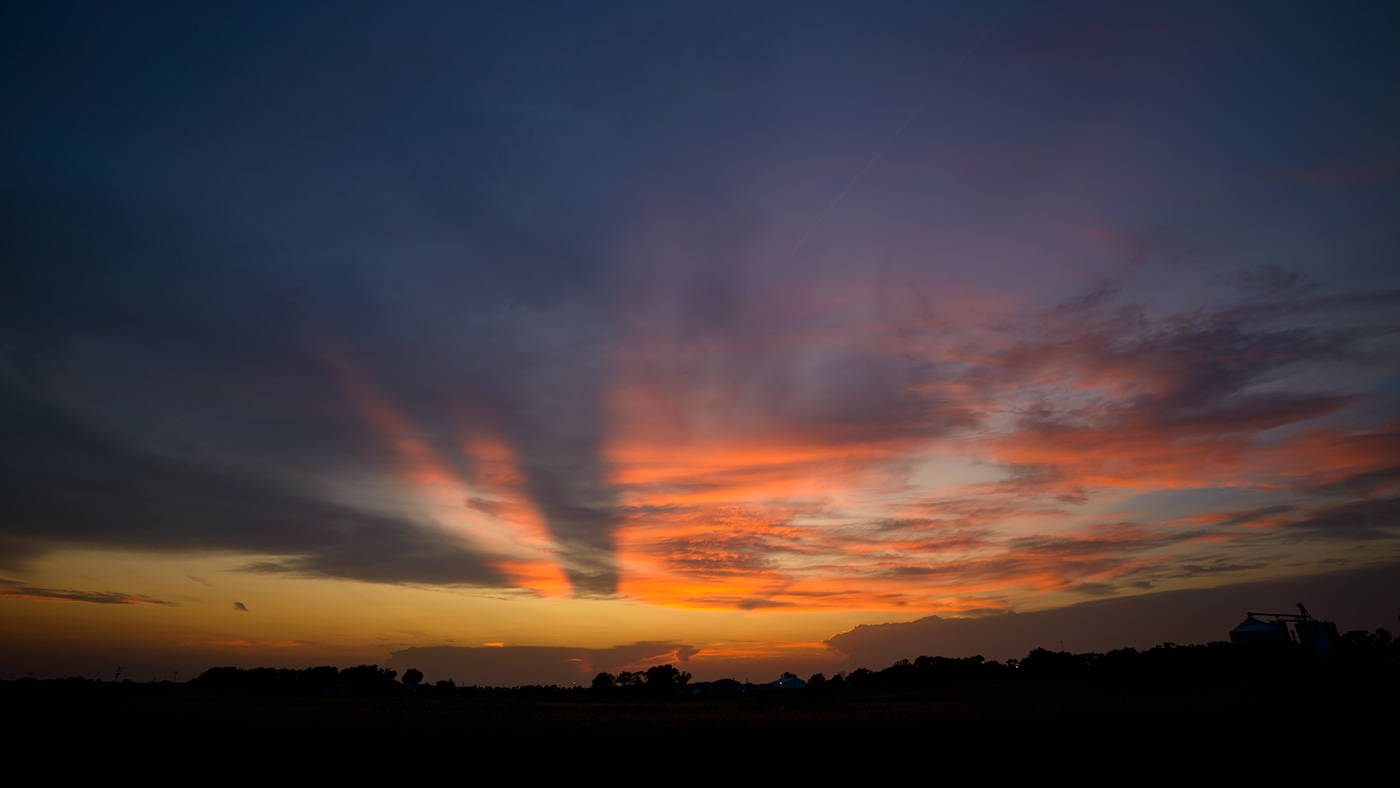 This photo is titled, “Bucks’ Ascension”.  It’s my tribute to my buddy who came along on many of the drives along dusty roads as we looked for deer and sunsets.  What I find interesting in this shot is the odd dark patch near the middle.  Is this the shadow cast by a little puppy?  Does it represent the part of Buck that is still with me?  I’m not sure yet, but like Buck, this photo is a little deeper than it first appears.

After getting the shot, I drove home.  I went inside to wake up Cindy from her nap and told her she needed to come outside.  As Cindy slowly woke up, I opened the back doors of the Suburban without saying a word.  Inside… nothing.  Then a skinny puppy popped up from the front seat and ran to the back.

We brought the little guy in and fixed up a crate and made him a bed.  He had a new home, and soon, a much needed bath.  He is on the road to recovery, but not out of the woods yet.  He needs to put on weight and we hope that his kidneys and liver haven’t been damaged by his starvation.  He’s getting small meals three times a day, minimal water and several walks a day out in the yard.

Christie warned us not to name him or get too attached for the first week as his condition could change for the worse.  We heeded her advice for almost 24 hours.

After putting up a Facebook post, Cindy had a lot of comments – one of which was that he deserved a name no matter how his health goes.  So in that spirit, we have named him “Diamond”.  Found on Diamond Road – tough as a Diamond – and a Diamond in the ‘Ruff’.

We’ll be posting updates on a new Facebook page if you want to follow along and see how Diamond progresses.  He’s a fighter, and we’re hoping for the best.

Here’s a photo of Diamond in his new home – all 11 pounds of him! 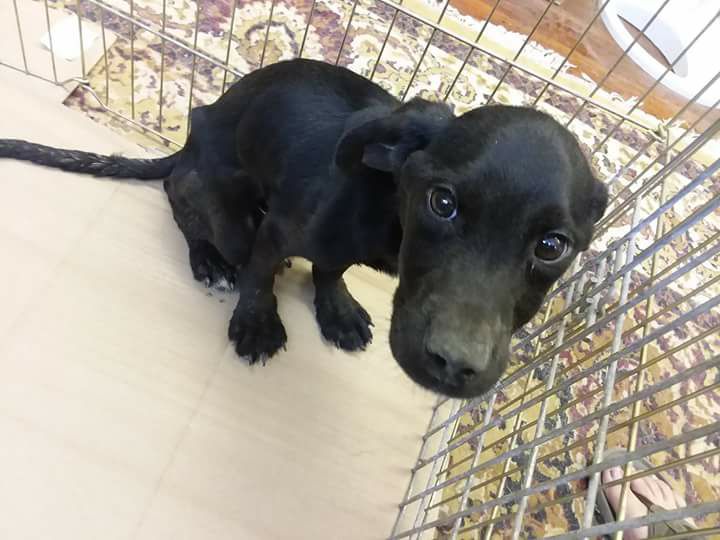 Diamond is doing great and is a healthy, spoiled young dog.   He likes to ‘play’ with the Newfys (which is usually just biting at them) and is somewhat trained (when he chooses) – but most all… healthy. 😀  We went back to Diamond road tonight and shot a new photo. 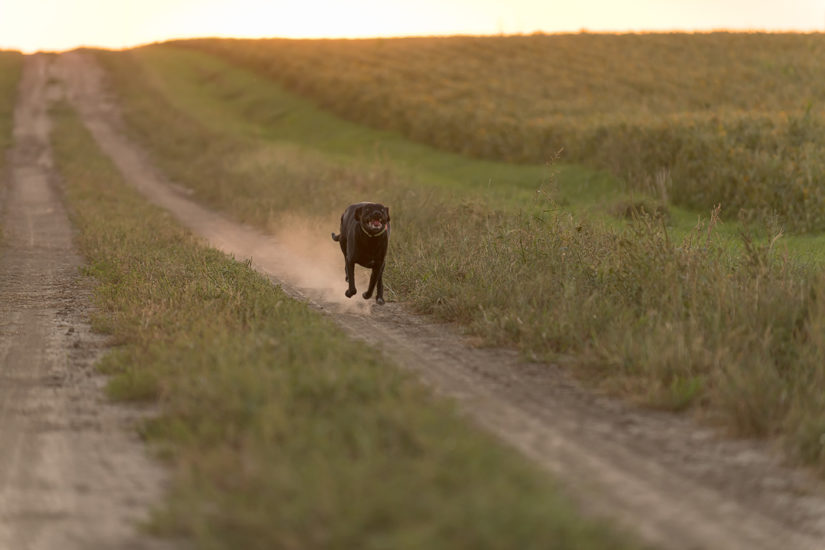 September 15, 2019: Two years on and Diamond is growing into a fine young dog! He’s strong, smart and still a pup at heart.