In the early hours of April 15th, 2014 we were able to witness a rare lunar eclipse on a near full moon.  It peaked at about 2:00am local time.  Click any image for a larger view. 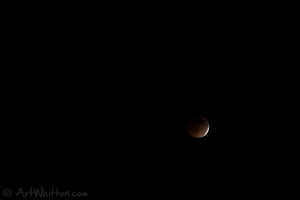 Here in Chester Nebraska, the clouds were gone and it looked like a clear night, so I decided to stay up and see what I could shoot.  I’ve shot the moon before, and I’ll tell you now, it’s a LOT easier when the moon is lit than when it goes dark in the earth’s shadow.

I shot this event with a Nikon D800E and a Nikkor 300mm f4 telephoto lens on a tripod.  I used an electronic cable release to avoid camera shake.

First I’ll start with the challenges of shooting a lunar eclipse:

The moon gets quite dark during an eclipse.  That means it’s tough to focus on and your light levels are low.  You need to choose between a low shutter speed to let the light in, or a high ISO for the sensor to gather more light.  Your aperture will likely be wide open.  This also means that you’ll want a good tripod.  My most successful image was shot at ISO 100, f4, 1/2 second.

Due to the amount of camera shake , the autofocus was not effective.  I switched to manual focus and had two ways of doing this.  I could look through the viewfinder and try to manually focus on a shaking moon.  This didn’t really work as each time I touched the lens to focus, it moved and I couldn’t really guarantee that I was focusing correctly.  I instead switched to ‘Live View’.  This allows me to see the image on my camera’s LCD screen and see what the sensor is seeing.  I grabbed my reading glasses, and while still dealing with the camera shake issue I was able to get it fairly close focus.  A movement of less than 1/4″ turn on the barrel was enough to throw the moon out focus, so it had to be precise. 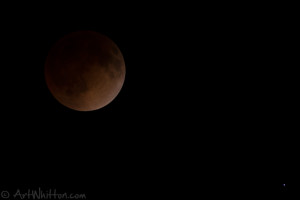 Setting the White Balance was the easiest part.  I just used the default Daylight setting as the moon was reflecting daylight while it was lit by the sun.  This allowed me to get a fairly accurate color when the moon moved into the earth’s shadow as well.

Everything was set – exposure, white balance and focus.  I shot about two dozen images and was trying different exposures.  I also had to make sure that focus was maintained and the moon didn’t move out of the viewfinder.  I should have brought a chair with me!

After shooting for about 30 minutes I packed up and went inside.  I felt that I had a reasonable shot or two and could crop down to get a reasonable web-sized image.

I went through the images and found that really only a few were sharp enough when viewed at 100%.  I knew that some post-processing would be in order. 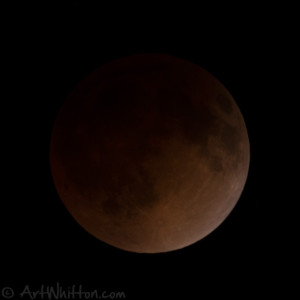 Blood Moon – out of camera

Here is the image that came out of my camera at 100% crop.  It’s a decent photo, but I have some tools in Photoshop to get a little more sharpness.  Here’s a tutorial from my other site that explains these tools.

These are the steps I used to adjust my image:

The last thing I did was to erase the slight halo that I ended up with from the sharpening.  I did this on the duplicate layer so that the original image would show below to give a more natural looking edge. 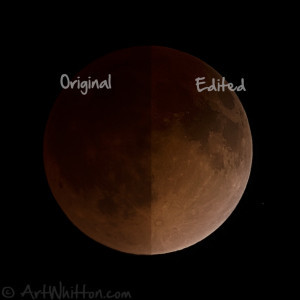 Blood Moon – Before / After Editing

This image shows the effects of editing.  You can see how the edited version is sharper and brighter.  I don’t normally resort to extreme measures like this, but with the issues I face last night, I found that they were needed to produce an image I was happy with. 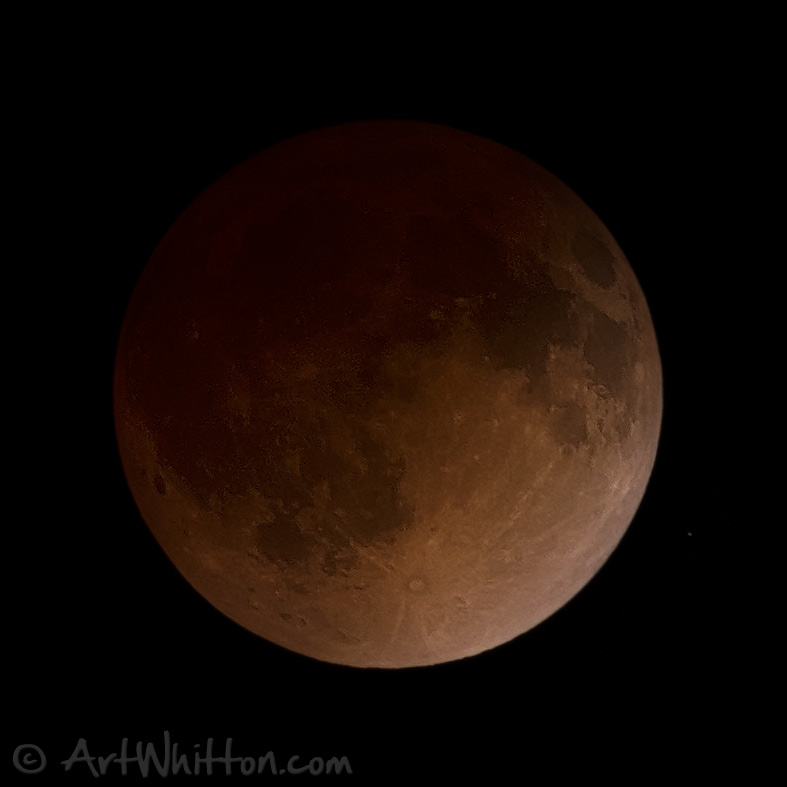