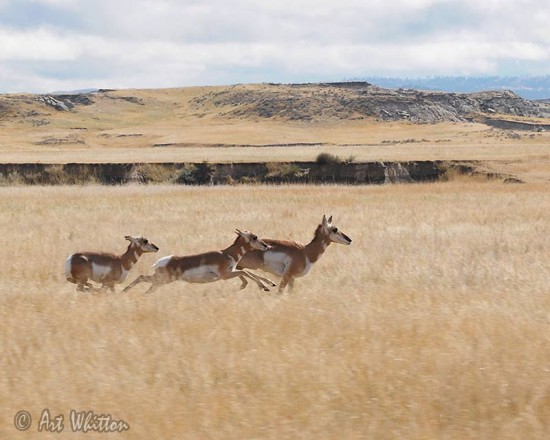 I took a trip up to the Sandhill region of Nebraska and one of my goals was to get a photo of an Antelope – I’d never seen one in the wild, so I hoped (a) that I would see some – and (b) hoped that I could return with a decent image.

I had already seen a few on my trip and this shot was taken towards the end of the journey.  I had decided to drive out to Toadstool Geological Park.  I was on my way back from the Black Hills of South Dakota (due to a lot of early snow) and figured that I would check out the ‘Toadstools”.

Little did I know that it had rained before I got there.  The road out the to park was a mud pit.  If I didn’t have the Suburban – I wouldn’t have tried it.  But I kept going and drove about 15 miles through this mess.  A least I stayed on the road!

About 2 miles from the park, I saw these antelopes on the left side of the road.  At first they ignored me, but then they took off running parallel to my truck.  So I kept driving, and luckily had my 70-200 f2.8 lens mounted on my D300.  I grabbed my camera and checked the settings (quickly since I was driving down this narrow muddy road) and then pointed it out the driver side window.

Now the Antelope were getting a little closer and so I put the camera up to my eye and started shooting while driving with my knees.  *Note: This is not recommended for sane people.

I managed to fire off about 5-6 shots while doing this.  Then I remembered something a park ranger had told me a couple of days earlier: “Antelope don’t turn – they run straight”.  This turned out to be a fantastic fact as my road was curving straight in the antelope’s route.

I put the camera down and came to a somewhat safe stop and watched the antelopes run past in front on me.

That was FUN!  Afterwords, the Toadstool park was quite anti-climatic.  It was also a mud pit, so I didn’t do the full trail.

Here’s one of the less successful shots from the series:

Here’s an antelope that stood still for me earlier in the trip – maybe he was making a comment on my photography? 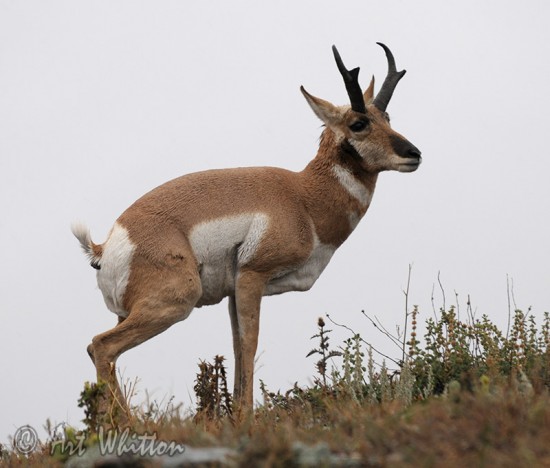 Shooting wildlife is a blast – I plan to share more photos and the stories that go with them – so check back.

If you have any fun stories, or want to comment on this one, just leave your reply below.