This week gave me a different kind of project.  I was to visit a museum to get inspiration and shoot a photo to emulate the work of another artist.  The problem with this is that the nearest museum is over 100 miles away.  Also it’s winter it just wasn’t a good week for travel.  Thankfully, I have all of the great artists’ work in my home, on my computer via the internet.

But where do you start?  Google ‘artists’?  Visit The Louvre online?  I started down the rabbit hold of internet searches and had a fun time viewing artwork.  Still this didn’t get me closer to my goal of finding an artist I could focus on.  So I took another approach.  I thought about what I have available to me that could help me create a new photo.  Then it came to me.  If you’ve ever watched “How the Grinch Stole Christmas”, you might recall the scene where the Grinch looks for a reindeer and his eyes settle on his dog Max.  With a glean in my eye, I looked over to Buck and smiled an evil smile.  William Wegman would be my artist to emulate.  If you’re not familiar with his name, I’m sure you’ve seen his iconic images of his Weimaraner dogs in various poses and costumes.  It seemed like a fun project to work on, but then Buck had different ideas.

The first step was to figure out what pose I would have Buck in.  After some thought I realized that Buck was either laying down on the couch or eating.  He’s a very smart dog but not well trained (that’s my fault).  He is very good at sitting though, especially if treats are involved.  With the pose set, I thought about selecting an outfit (yes, an outfit for my dog).  I wanted to keep the shoot fairly simple so I decided to go with a theme of ‘corporate headshot’.  I went to the thrift store and found a suitable shirt and tie for my dog.  Wow, that was a really silly thing to type.

Now I’m ready – get Buck dressed, have him sit in front of a backdrop and shoot.  Sounds easy enough in theory.  Cindy helped me as a dog wrangler and we were ready.  Buck was hesitant at first, but soon warmed up to the idea as treats were brought out.  That posed its own problem as Buck was more concerned about where the treats were than looking at the camera.  This was going to go smoothly, I just knew it.

Buck was moving around and shifting sideways and generally not cooperating, but that’s my fault since I hadn’t trained him.  Another thing is that I learned how fast Buck can move.  The time between a good pose and a bad pose is less than the time it take for me to recognize a good pose and press the shutter release.  I have dozens of photos like the one on the left.

We shot like this for about  half an hour. It wasn’t working.  For some reason Buck just didn’t care about the camera.  It was time to take a break and regroup.  I was rapidly gaining a new appreciation for Wegman’s work.  I was also reminded of W.C. Fields famous quote about “Never work with children or animals”.  The man was a genius.

We got back at it and shot some more.  I asked Cindy to stop giving Buck treats for a while, but now Buck was on to us.  Cindy’s fingers still smelled of dog treat and we were doomed.  Finally, we got a few reasonable shots and called it a day.  Buck had put in his time.  And won.

Below is the final shot.  I cropped it close then lowered the brightness and sharpened the image.  I used the burn tool to darken his pupils that were lit up by the flash.  I selected the background and used the Lens Blur filter to throw it out of focus.  As for the mis-matched ears?  That’s the feature that we saw in Buck when we rescued him from the pound 10 years ago. 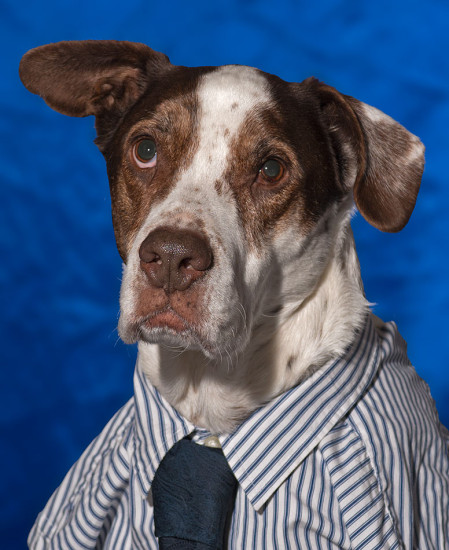