The first time I came to Nebraska was when we were looking for a place to buy.  We ended up in Lincoln and saw that it was a really nice, clean city.  We visited a couple of galleries, and wandered into the UNL campus and found the Arts building.  What a great amount of talent on display!  Then it was over the the Haymarket area and we saw a huge ‘brick mural’ – the first we’d ever heard of such a thing.  Towering over the downtown core is the Nebraska State Capitol Building. 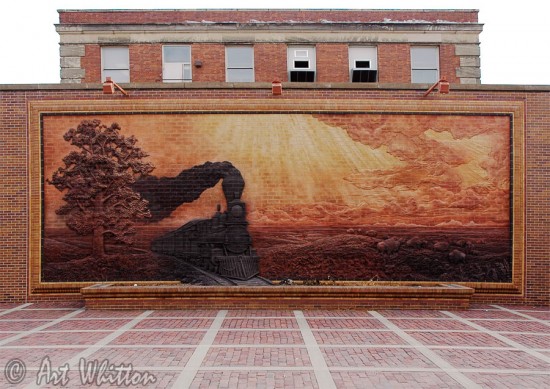 This amazing mural was built by Jay Tschetter and is just incredible to see in real life.

Our day ended with a trip to the Nebraska State Capitol Building to see what paperwork was needed for some plans we had.  On the outside, this building is just a grey monolith.  Nothing very special, and the tallest building in town.

Click on any of the image of the Nebraska State Capitol Building to see them at full size. 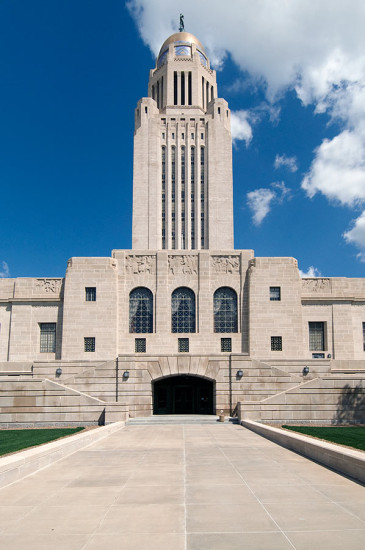 There’s some nice carvings on the outside, but nothing that prepares you for the views inside.  We walked in through one of the lower entrances. 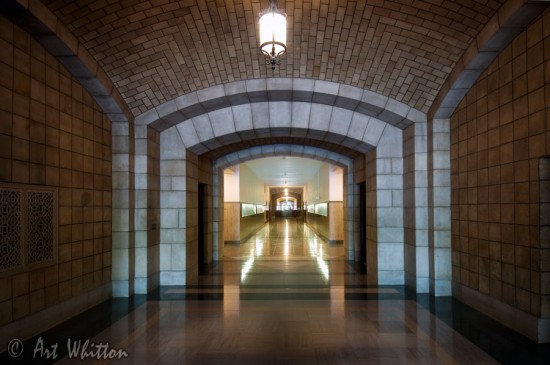 This image is a lot brighter than what you see when you walk in from a bright day.  But the feeling that you are about to enter George Orwell’s 1984 is chilling.  This long hallway leads you to an information desk.  One lady that tells everyone where to go. 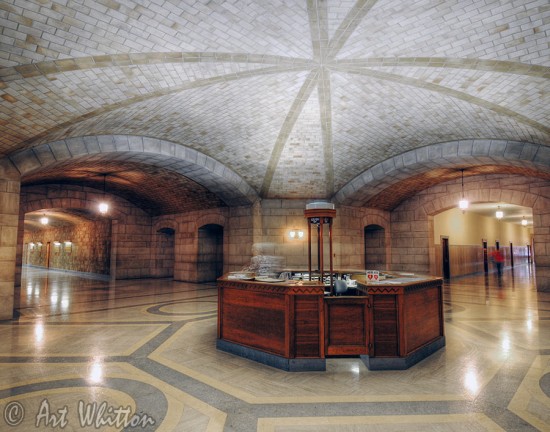 This is an HDR image that I made – the actual lobby is very dark, but it’s good to see the colors that are in here.  Four hallways merge here, and then you head upstairs.

There’s a few ways to get up to the next level.  This staircase is near the end of the north (?) hallway. 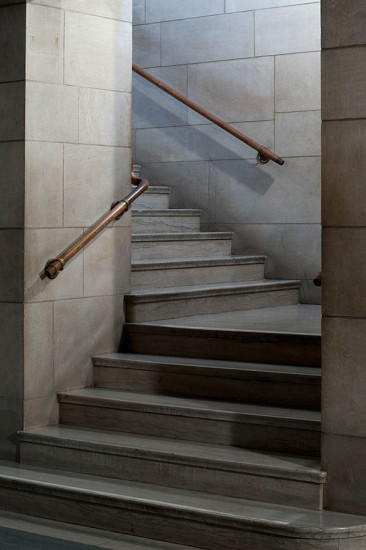 Going up these stairs doesn’t prepare you for the rest of the building.  According the website, “The floor plan of the Nebraska State Capitol Building is a cross within a square and the Rotunda is located at the intersection of the arms of the cross in the center of the building”.  Here is the end of the north arm. 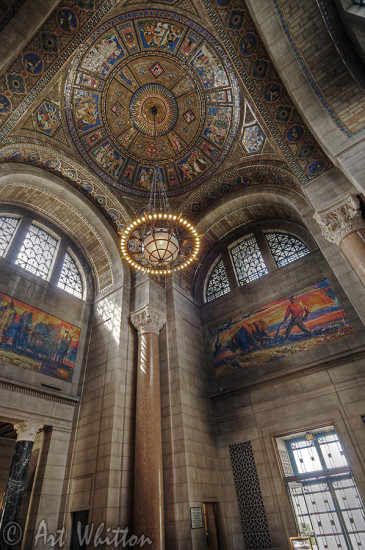 As you head towards the Rotunda, you need to remember to look up: 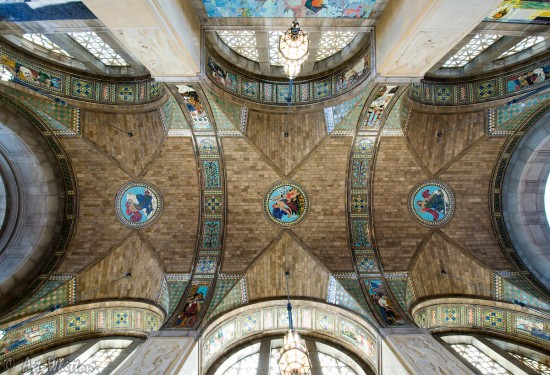 I really needed a wide angle lens for these shots – the space is huge and even at my widest settings I couldn’t fit all of the hallways in.  I’ve used a 12-24mm and 10-24mm in most of these images.  This floor is like a cathedral.  Here’s a view looking back down the hallway. 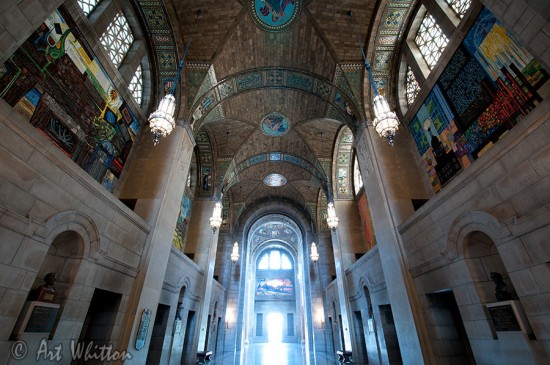 I need to go back on a day when the sun isn’t shining so bright.  It makes exposure a nightmare.  So after walking down the hall, you end up at the rotunda.  This is a huge open space and has some incredible mosaics on the floor as well. 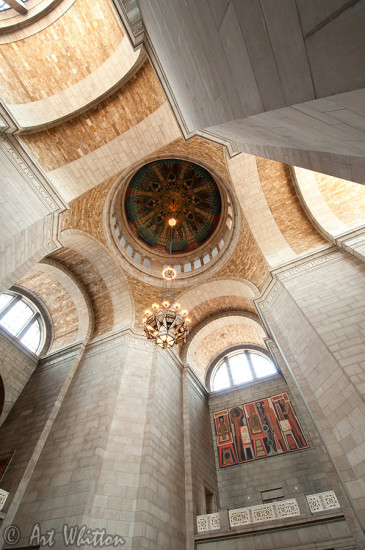 Now if you’re paying attention, you might have noticed in the exterior shot that this is a tall building.  The Rotunda here isn’t the top of the building.  You need to take an elevator up there (which I’ll show you later).  But did I mention the mosaics? 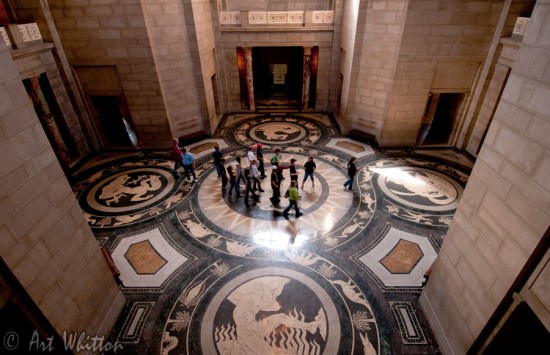 I love exploring the Nebraska State Capitol Building.  On one trip, I found the library. 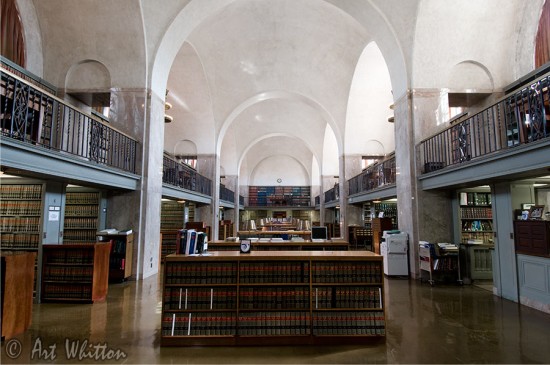 Another area of the building is devoted to the Nebraska Hall of Fame.  Leaders and builders of the great state are memorialized in busts along the hallways.  This sculpture is of Red Cloud – a Lakota Chief. 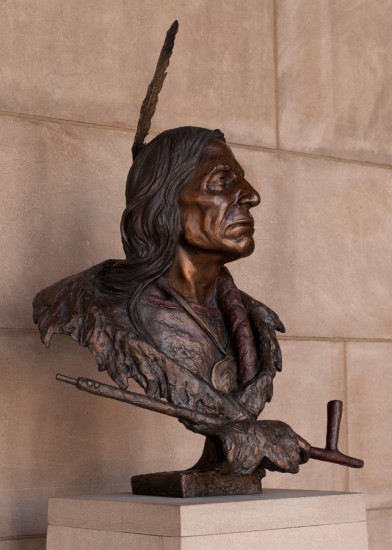 You’ll also see some Native American motifs in the building, such as this beautiful door that lead to the East Chamber that houses our unicameral government. 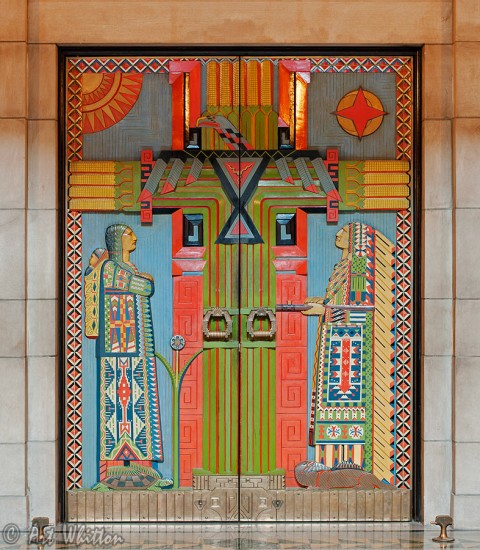 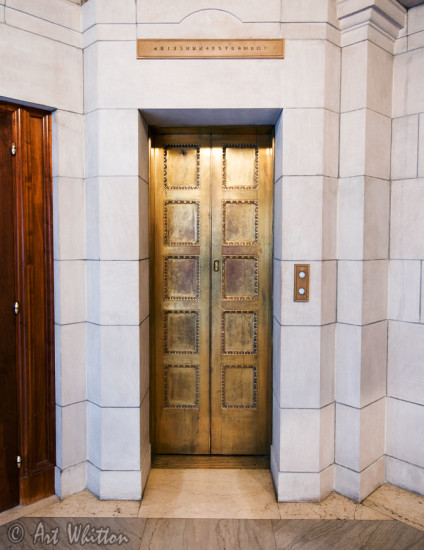 Take the elevator up to the 14th floor.  This will lead you to the Memorial Chamber.  It also leads to the observation deck so that you can see the bird’s eye view of Lincoln.

It’s hard to get a single shot of the Chamber as it’s fairly small and tall.  For now, you’ll have to settle for seeing it in two shots.  First is the floor and the lower walls.  You can also see 3 of the 8 murals which represent “heroic enterprises associated with Nebraska history”. 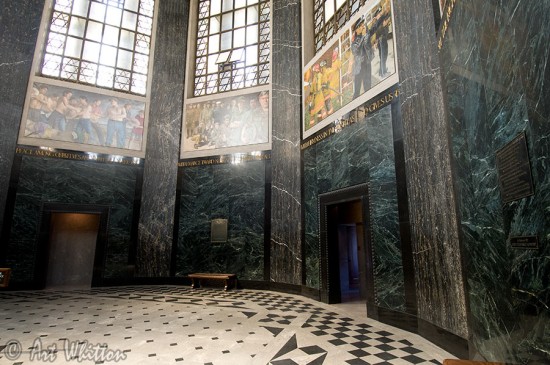 The marble in this room is incredible – actually, there is some magnificent slabs throughout the building.  But if you look up in the Memorial Chamber, you’ll see the domed ceiling, windows and some more of the murals. 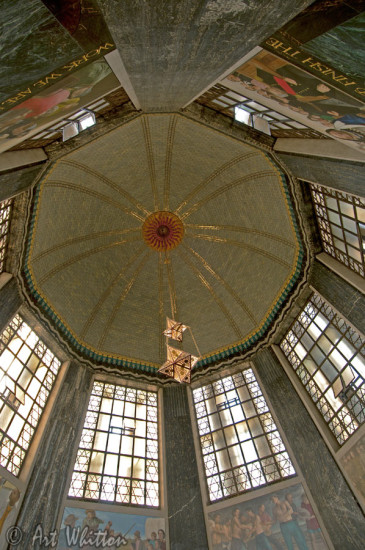 The Chamber  includes a quote from Lincoln’s second inauguration speech as well as a plaque with the Gettysburg Address.  One great thing about visiting the building is that you can visit all these spots on your own or with a guided tour.  Most times when I’ve been here, I’ll be the only in the Chamber and it’s a very peaceful place to be (until the school tour runs through!).  One of my favorite details in the building is the light fixture hanging from the ceiling in the Chamber.  It’s hard to see when you’re there, but the details are brought out in the photo. 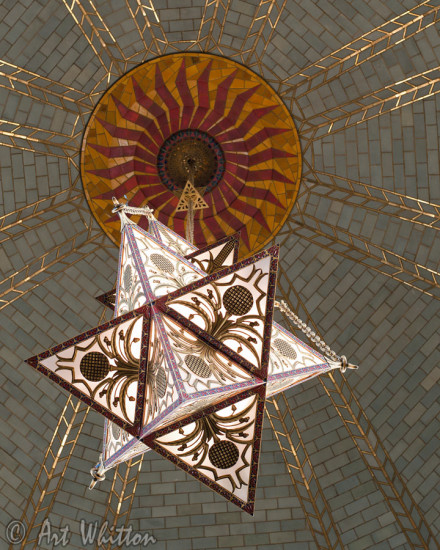 That concludes my tour from the basement to the top of the Nebraska State Capitol Building.  As you can see, it’s worth stopping by when you’re in Lincoln.

If you plan to photograph it, bring a wide angle lens – the spaces are so vast that anything longer than 35mm lens will not work well for you.  You will also want a tripod.  Most of this building is lit by window light.  So far I haven’t seen any rules about using a tripod inside here, but please be careful where you set up – it’s still a working  office building.  If you want to capture some of the details like the light fixture, bring another lens in the 50 to 100mm range.

Setting your White Balance can also be tricky due to the mixture of daylight and incandescent light.  Think about bringing a white card or cap to create a custom WB setting. Check out my tutorial about White Balance for more information.

If you have any comments, please leave them below.  Questions about the building?  Check out Capitol.org for more information and visiting hours.  Of course, you can always e-mail me if you have questions about any of the images.